Hundreds of residents participated in a community hearing process led by Councilman Curren Price in March and April, to discuss the City’s proposal to raise the minimum wage for all workers, a change that could positively impact the lives of more than 600,000 Angelenos . As Chair of the Economic Development Committee, Price led the series of committee hearings, hosted in Watts, Van Nuys and West Los Angeles, giving local residents a chance to voice their support and raise questions, as well as debate the results of three studies conducted in March gauging the economic impact of the wage plan.

The studies and hearings came as a result of a motion introduced last fall by Councilman Curren Price along with his colleagues, Councilmembers Nury Martinez, Mike Bonin and Gil Cedillo, which called for raising the minimum wage in Los Angeles to $13.25 by 2017 and $15.25 by 2019. Mayor Eric Garcetti also laid out his proposal to raise wages in Los Angeles last summer to $13.25 by 2017.

“As a policy maker, representing one of the poorest regions in this City, I know the real life impact that stagnant wages have had on our underserved communities,” said Councilmember Curren Price.  “I am very proud of the inclusive community discussion process we had, which brought out more than 600 residents over the course of two weeks, and provides my colleagues and I with invaluable feedback as we work to craft the best policy possible for the City.”

The City’s plan to raise the minimum wage would improve the lives of more than 600,000 Angelenos and create a positive economic impact for Los Angeles, the economic report by the University of California Berkeley found. That study, The Proposed Minimum Wage Law for Los Angeles: Economic Impacts and Policy Options, determined that “the benefits of the proposed minimum wage law will largely outweigh the costs in Los Angeles City, and when the larger region is considered, the net impact of the law will be positive.”

Healthier Markets Making Their Way Into the "New Ninth"

Councilmember Curren Price was excited to help celebrate the grand re-opening of ALBA Healthy Snacks and Services, on Vermont and 60th Street this March. Formerly the site of a “$1 Warehouse,” owner Nelson Garcia partnered with the Los Angeles Food Policy Council to transform his storefront shop into a healthy market. Replacing fried potato chips with baked bean chips and candy bars with fresh fruits and the like Garcia said he hopes to not only help community members eat better, but also to change the perception that South Los Angeles communities don’t want healthier food options.

“I hope my business is successful and helps us prove that our community wants more healthy options – we just need to make that available,” Garcia said.

“For too long, our community has suffered from high rates of diabetes, obesity, and heart disease while we have also faced a lack of healthy food options.  Well, residents in South LA deserve better, and this market makeover project is an example of community businesses stepping up to be a part of the revitalization of our community,” said Price said. 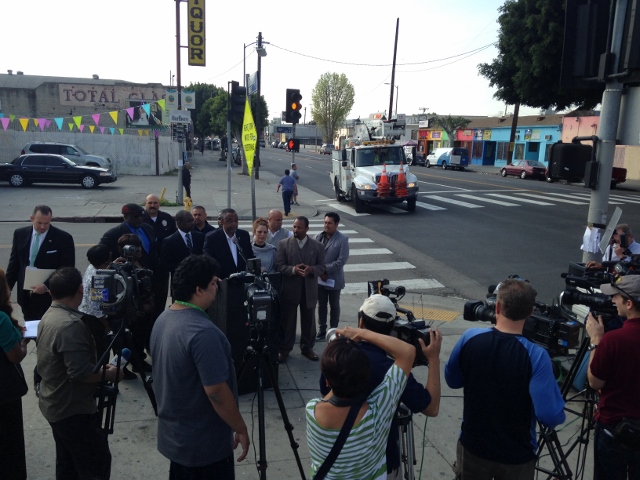