LOS ANGELES – Five years after Councilmember Curren Price and José Huizar introduced a motion to legalize Sidewalk Vending,  the Los Angeles City Council approved a plan on April 17 to direct the City’s Planning Department and City Attorney to write the ordinance. The Council backed a plan introduced the day prior in the Economic Development Committee (EDC) - chaired by Councilmember Price, with Huizar and Joe Buscaino as members. Price introduced an amendment in EDC to find common ground in developing an enforceable and fair Sidewalk Vending Ordinance by rejecting a proposal that would allow brick-and-mortar business owners the power to veto sidewalk vendor licenses. Instead, committee members, and today the full City Council, favored a plan that would establish a formal hearing process, allowing adjacent property owners to voice concerns and submit appeals to proposed vendors based on health and safety issues.

“Today, the City of Los Angeles took historic, brave and decisive action that is long overdue,” said Councilman Price. “We enter the last leg of a long race and are one step away from delivering a fair and balanced sidewalk vending policy that protects vendors, allows business input, and gives Council the ability to weigh in on their district's needs.

The Economic Development Committee on Monday approved details of what would be the first-ever citywide sidewalk vending program. In addition, committee members asked for the development of enforcement protocols, including possible confiscation of goods and equipment, to ensure the health and safety of the community. With Tuesday’s City Council vote, an ordinance could be in place by July 1, 2018, with the program expected to be fully operational in 2019.

"This is seminal vote for the City of Los Angeles and the thousands of immigrant and low-income Angelenos who work as sidewalk vendors and have asked us for five years to regulate them so they can get permitted, come out of the shadows, feed their families and become part of the City’s economy,” said Councilmember Huizar.  “We have tried to craft a plan that takes all perspectives into account and I have always said, if you want sidewalk vending or if you don’t want it, you should support a legal ordinance regulating it. Continuing on the path we have been on for decades is an exercise in futility. This is what was needed.”

Of America’s 10 biggest cities, Los Angeles is the only one that does not have a process for street vendors to sell legally. Chicago, Portland, New York, Austin do.

And sidewalk vending is already part of Los Angeles’ culture and underground economy. A 2014 study from the Economic Roundtable shows that LA’s sidewalk vendors generate $434 million in economic output annually. The same study found that for every $2 earned by a sidewalk vendor, an additional $1.72 in economic activity is generated.

In 2017, the City Council voted overwhelmingly to decriminalize sidewalk vending in response to the Trump Administration’s policy that places undocumented immigrants with criminal charges in jeopardy of being deported. Since then, close to 1,500 pending misdemeanor charges against sidewalk vendors have been dropped. 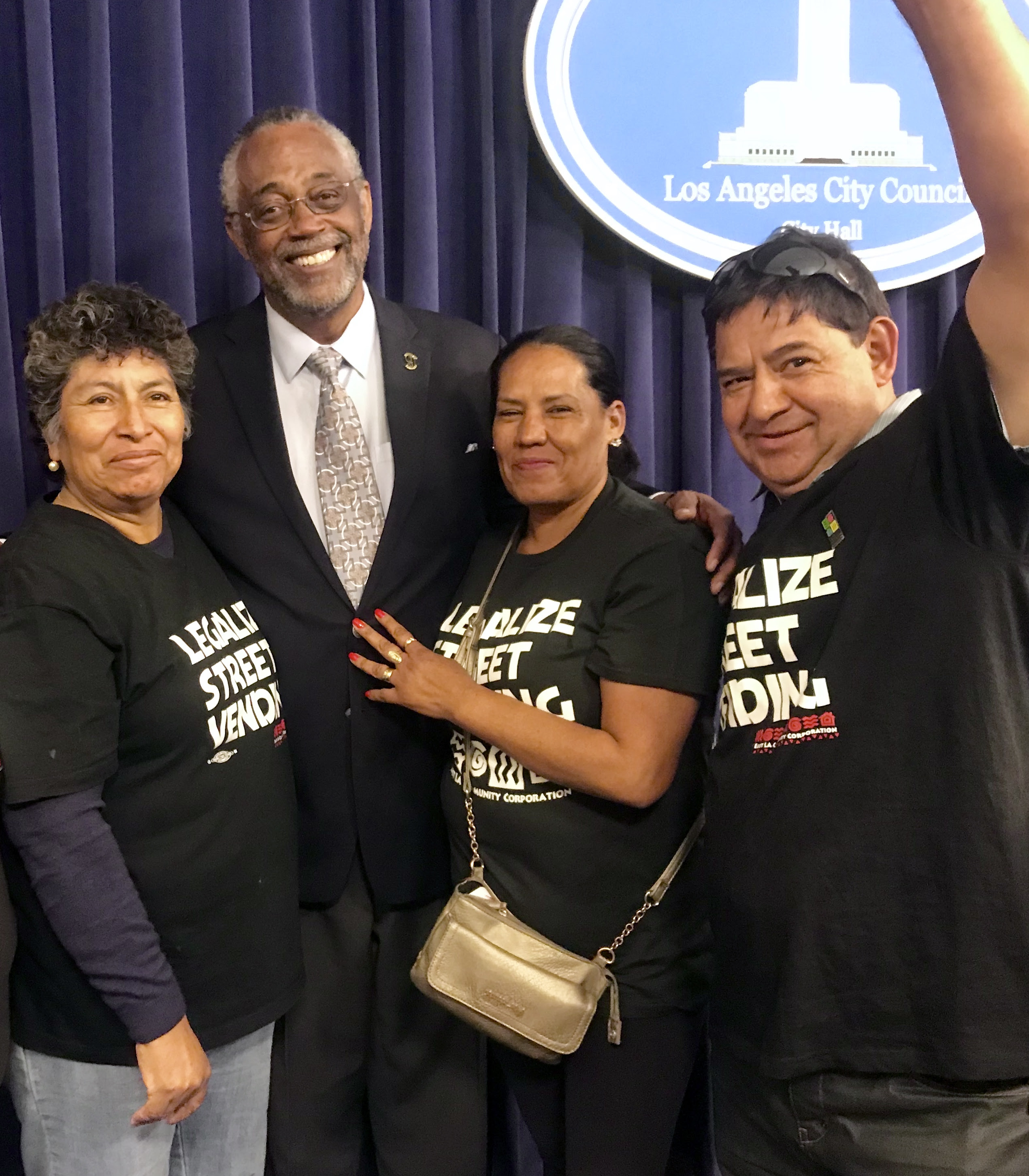 Click here to hear a message from Merced who was at today's City Council meeting, and is one of tens of thousands of sidewalk vendors in Los Angeles.