Price said the money will come from his office's Environmental Equity and Reimagining Public Safety dollars, and will provide long-term housing, repairs and financial assistance to residents whose homes were damaged by the June 30 blast. 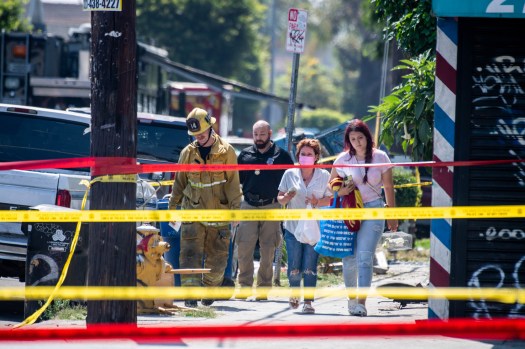 A LAFD firefighter helps people leave the area on Thursday, July 1, 2021 where a LAPD Bomb Squad truck exploded with illegal fireworks in South Los Angeles. The truck failed to handle a planned detonation of seized explosives the night before leaving 17 people injured and damage in the neighborhood. (Photo by Sarah Reingewirtz, Los Angeles Daily News/SCNG)

Price said the money will come from his office’s Environmental Equity and Reimagining Public Safety dollars, and will provide long-term housing, repairs and financial assistance to residents whose homes were damaged by the June 30 blast.

“It should never have happened in the first place and it is clear that the city is at fault in this explosion. But the damage and destruction has been done, and it is now time to restore our family and rebuild our community,” Price said.

The detonation sent 17 residents and first responders to the hospital, destroyed the bomb squad truck and damaged 22 residences, 13 businesses and 37 vehicles. Since the explosion, victims forced to evacuate their homes have been provided with access to housing, funds needed to satisfy their basic need and three meals a day.

The councilman said his fund will give displaced residents “first-class quality long-term housing,” help them with home repairs — including broken windows, plumbing, and structural repairs — as well as give $10,000 no-strings-attached grants to 25 households that have been pre-identified as being severely impacted.

“I want to make sure that we’re doing all we can, as quickly as we can, to restore these families to some sense of normalcy. Our families need help now. Not two weeks from not, not two months from now, not two years from now, but now,” he said.

“I’ve said it before and I’ll say it again, my office was not notified of the detonation of this dangerous explosive, and had we been notified we would have said no, said hell no, you can’t do that out here, not like that.”

Black Lives Matter-Los Angeles and several people who phoned in to the police commission meeting Tuesday called for Moore to be fired and for the city to pay reparations to residents.

“We stand up, we are insistent, we say over and over: Chief Moore must go.”

According to Moore, a preliminary investigation by the Bureau of Alcohol, Tobacco and Firearms and Explosives’ National Response Team found that the bomb squad significantly underestimated, based on a visual assessment, the weight of explosive material that was being loaded into the truck for detonation.

The truck — which had been used 41 previous times over the last decade, including for three detonations in June — can safely contain the detonation of up to 15 pounds of explosive materials for repeated use or up to 25 pounds for one-time use that would render the truck out-of-service in the future. Bomb technicians followed department protocols to limit handling of the explosive devices and estimated the total amount of explosive material being loaded into the truck was 16.5 pounds, Moore said. The National Response Team’s physical weighing of the materials found that the actual amount was 42 pounds.

Price said Monday that he was “infuriated” by the findings that the bomb squad likely overloaded the truck with explosives. He called the error “by far one of the LAPD’s largest blunders in recent history, which has further betrayed the trust of our South L.A. community.”

Moore insisted Monday morning that bomb squad technicians were “operating with the best intentions” in a stressful situation. But he said if mistakes were made in estimating the weight of explosive material placed in the truck, “I will hold the appropriate individuals accountable.”

He said the bomb squad has already begun implementing new procedures as a result of the explosion, including the required presence of a commanding officer during future detonations. The department will seek best practices from other departments to evaluate what other changes should be made.

City Attorney Mike Feuer said Tuesday that his office has received 56 claims filed against the city related to the explosion, and is addressing them within a day of their filing.

On Monday afternoon, the city opened a new resource center to assist affected residents at the YMCA at 1006 E. 28th St. It will serve as the designated location where victims can connect with a wide range of services, including opportunities to file a claim, obtain mental health and wellness referrals, as well as other supportive services. The office is open Monday through Friday, 3 p.m. to 6 p.m.

The ATF’s National Response Team responded to the scene on July 2 and conducted a week-long investigation. It will formalize a “cause and origin report” based on its field work, 40 interviews with witnesses and personnel, forensic tests and evaluation of damage and surveillance footage. The report will be sent to the National Center for Explosive Training and Research for review, and the LAPD expects to have it in 30 days.

Authorities have said about 32,000 pounds of fireworks were being stored at a home on East 27th Street, where they were being sold. The home’s resident, Arturo Ceja III, 27, was charged with illegally transporting tons of explosives. He is set to be arraigned Aug. 2.

Prosecutors said Ceja purchased most of the explosives from a dealer in Pahrump, Nevada.