Following the hearing, the City Council unanimously approved a motion to order a report from the department on the "failed operation" and how the public will be better protected in the future. The City Attorney's Office was also instructed to ensure that people are properly compensated for property damage and injuries. 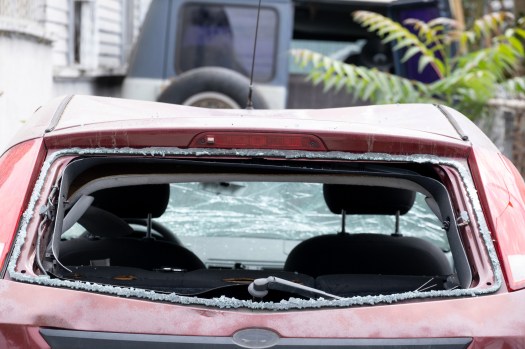 Car windows were blown out in the 700 block of 27th Street in Los Angeles after the LAPD detonated fireworks in their explosives vehicle and caused damage to much of the neighborhood. Residents were allowed back to their houses Thursday to collect more of their belongings. (Photo by David Crane, Los Angeles Daily News/SCNG)

LOS ANGELES — City Councilman Curren Price questioned Police Chief Michel Moore on Wednesday, July 28, over the destructive fireworks explosion set off on June 30 by an LAPD bomb squad and why his office wasn’t notified in advance about the detonation in his district.

Following the hearing, the City Council unanimously approved a motion to order a report from the department on the “failed operation” and how the public will be better protected in the future. The City Attorney’s Office was also instructed to ensure that people are properly compensated for property damage and injuries. The office has received 145 claims for money for damages and 62 were still being processed as of Wednesday.

Some of the claims have been paid, according to Kelli Porter, deputy city attorney, but she did not have the exact number.

Moore has previously said that Price’s office was notified ahead of the detonation, but he backtracked Wednesday following Price’s reiteration that his office was not informed in advance.

“Let me be clear that your office was not notified of the planned detonation of this material,” Moore said.

Moore said Price’s office should have been notified about the evacuations, but the department “fell short.”

Price also asked when the names will be released of the LAPD personnel involved in the botched detonation, but Moore said he believes state law prohibits him from releasing the names. He added that “ultimately to the members of the community, I’m responsible for this as the chief of police.”

Price is designating $1 million from his office’s Environmental Equity and Reimagining Public Safety fund to provide long-term housing, repairs and financial assistance to residents whose homes were damaged by the blast. He’s also providing $10,000 no-strings-attached grants to 25 households that have been pre-identified as being severely impacted.

“We don’t want another apology. We don’t want you to feel sorry for us. We want action from our government and we want it now,” Price said.

A preliminary investigation into the blast by the Bureau of Alcohol, Tobacco and Firearms and Explosives’ National Response Team found that the LAPD bomb squad significantly underestimated, based on a visual assessment, the weight of explosive material being loaded into the truck for detonation.

The truck — which had been used 41 previous times over the last decade, including for three detonations in June — can safely contain the detonation of up to 15 pounds of explosive materials for repeated use or up to 25 pounds for one-time use that would render the truck out-of-service in the future.

Bomb technicians followed department protocols to limit handling of the explosive devices and estimated the total amount of explosive material being loaded into the truck at 16 1/2 pounds, Moore said on July 19. The National Response Team’s physical weighing of the materials found that the actual amount was 42 pounds.

“How could the LAPD Bomb Squad make such a stupid mistake. How could they have allowed this to happen in my working class community?” Price asked.

Moore said he would wait for all the information from the ATF’s investigation before disciplining personnel, adding that if individuals followed department protocol, they wouldn’t be held responsible.

“Part of the responsibility is upon the reckless action of individuals who bring fireworks and store them for the commercial selling on an underground market to our residents,” Moore added.

Price said that individual has been identified and is being held responsible.

Authorities have said about 32,000 pounds of fireworks were being stored at a home on East 27th Street, where they were being sold. The home’s resident, Arturo Ceja III, 27, was charged with illegally transporting tons of explosives. He is set to be arraigned Aug. 2.

All businesses around San Pedro Street have been able to reopen, along with full resumption of traffic on 27th Street. Displaced families were initially housed in local motels, but the city has now rented 29 “corporate housing” units, which Moore said were fit for long-term residency and include kitchens.

Sixteen residential structures remain unoccupied as repairs are pending, including an apartment complex that housed 14 families, Moore said. Families who live in the complex are technically allowed to return, but Moore said the building’s owner was resisting because of “some legal issues over the repairs.”

The LAPD has begun implementing new procedures as a result of the explosion, including the required presence of a commanding officer during future detonations. The department will seek best practices from other departments to evaluate what other changes should be made, according to Moore.

On July 19, the city opened a resource center to assist affected residents at the YMCA at 1006 E. 28th St. to serve as the designated location where victims can connect with a wide range of services, including opportunities to file a claim, obtain mental health and wellness referrals, as well as other supportive services. The office is open weekdays from 3 p.m. to 6 p.m.

The ATF’s National Response Team responded to the scene on July 2 and conducted a weeklong investigation. It will formalize a “cause and origin report” based on its field work, 40 interviews with witnesses and personnel, forensic tests and evaluation of damage and surveillance footage. The report will be sent to the National Center for Explosive Training and Research for review, and the LAPD expects to have in the next few weeks.