Council members point to disparities between city responses to incidents that happened in two areas, one less affluent than the other 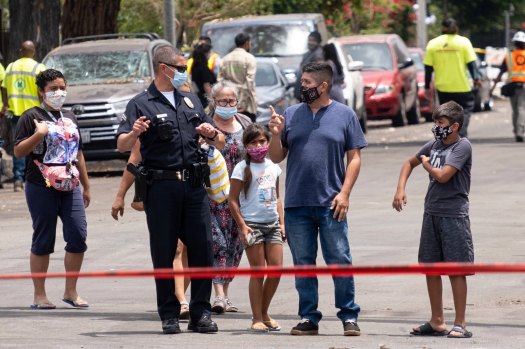 Residents are allowed back to retrieve items from their homes in the 700 block of 27th Street in Los Angeles where the LAPD detonated fireworks in their explosives vehicle and caused damage to much of the neighborhood. Residents were allowed back to their houses Thursday to collect more of their belongings. (Photo by David Crane, Los Angeles Daily News/SCNG)

The city was less responsive to a South Los Angeles community rocked by a major explosion from the police department’s detonation of fireworks, than to the more affluent, seaside neighborhoods affected by a sewage spill from the Hyperion Water Reclamation Plant, the Los Angeles council members representing those two areas argued on Wednesday, Aug. 11.

In a motion introduced Wednesday, Mike Bonin, who represents the coastal communities near the plant, and Curren Price, who represents South Los Angeles residents affected by the blast, called for a review of the way the city compensates the victims of disasters or accidents caused by the city, pointing to a disparity between the way the city responded to the two recent accidents.

When 17 million gallons of raw sewage poured into the Santa Monica Bay from the reclamation plant, nearby residents reported experiencing rashes, nausea and burning eyes from the fumes and odors. Eleven days later, the sanitation department announced it would reimburse residents for air conditioners, if they stayed in the area, or provide hotel vouchers if they wanted to leave.

Meanwhile, in South Los Angeles, officers from the Los Angeles Police Department detonated fireworks taken from a residence in the area, sending six civilians, an ATF officer and 10 police officers to the hospital, as well as damaging homes and businesses. Two elderly men who lived in homes damaged by the blast later died. Not only was the city’s preparation and notification of the detonation inadequate, the area’s councilman, Curren Price later needed to step in to move $1 million from an emergency relief fund to book hotel rooms for several dozen people, affected by the resulting explosion, the motion said.

Price said in a statement that as his South Los Angeles district “reels from the reckless damage and devastation caused at the hands of LAPD compared to the sewage leak at the Hyperion Water Reclamation Plant, it is clear that the city’s response in lower-income, black and brown communities does not receive the same level of attention, resources or sense of urgency in relation to more affluent parts of Los Angeles.”

He also noted that more than a month later, there are still “more than 80 people displaced, dozens of homes and cars damaged, businesses suffering financially and a community demanding action from its government.”

He said the constituents in his area deserve to have “an equitable framework in victim compensation and support to ensure all victims are treated the same no matter where in the city they live.”

Bonin and Price are now calling on legislative staffers and the City Attorney’s Office to review the protocols for providing compensation to victims of accidents and disasters caused by the city.

“The discrepancy of these two responses, with (the sanitation department) subsidizing residents to relocate due to the Hyperion sewage spill, versus households displaced by the LAPD explosion being left to wait for assistance found by their council member, lays bare inequities in the response by city departments to various communities throughout our city,” the motion read.

The motion also called for the city’s office of racial equity to come up with an “equity framework that can be used by all departments in providing victim compensation in the event of a city-caused accident or disaster.”

According to an aide for Price’s office, the motion still needs to move through the approval process, so it could take several months for staffers to report back on the issues raised in their motion.

The motion, which was also backed by Council President Nury Martinez, was assigned to the Immigration, Civil Rights and Equity Committee.