Legendary artists Barbara Morrison & The Bu Crew and John “Dandy” Rodriguez and the N.Y. L.A. Salsa Dream Team are among the dozens of musicians taking the stage at the24th Annual Central Avenue Jazz Festival July 27-28. For more than two decades, the FREE music festival has been a favorite among the millions of people who have enjoyed the revered summer event over the years.

“This year’s Central Avenue Jazz Festival will be an experience you won’t forget!” said Councilman Curren Price, who hosts the signature event in District 9. “It is a celebration of music, history and community.

It was important to me that we pay homage to the historical predecessors while integrating diverse musical groups. From traditional to contemporary sounds, fusion and Latin jazz, we’ve developed a lineup like no other.”

The annual event in South LA pays homage to the region’s rich cultural past and turns the spotlight on what was once considered the heart of the jazz scene. This year’s dynamic lineup includes a wide array of musicians, including:

Sheléa has a voice that stirs the soul and hands that effortlessly glide over the keys. Sheléa represents a return to true artistry that has garnered much attention and adoration from legends throughout the music industry. Her sultry sound is an exciting oasis in an age of auto-tune. Blending traditional pop, jazz, R&B and soul, Sheléa brings a contemporary edge to classics and a classic touch to contemporary pop standards. In March 2019, Sheléa will star on PBS, joined by special guests David Foster and Greg Phillinganes, in the concert special QUINCY JONES PRESENTS: SHELÉA.

Barbara Morrison is known for a melodic voice and a three-and-a-half-octave range. She interprets a familiar jazz and blues classics repertoire in a unique style and also sings original contemporary tunes. One example of her original music is “I Wanna Be Loved,” co-written with Michael Cormier, which is a musical theatre production about the life and times of Dinah Washington, Queen of the Blues.

Headed by Snarky Puppy’s Multi-Grammy winning percussion duo of Robert “Sput” Searight and Nate Wirth, Ghost-Note is an explosion of sound with an expansive roster of next-level musicians.

Chris Dave is one of the most revered and in demand musicians of his generation. His eccentric approach to the drum set and his ability to adapt to any musical setting, whether jazz, hip-hop or R&B, has put him in a category of his own. He has been around the world and back, playing and recording with some of music’s most established and iconic artists.

Cassandra Wilson is an American jazz musician, vocalist, songwriter and producer from Jackson, Mississippi. Described by critic Gary Giddins as “a singer blessed with an unmistakable timbre and attack who has expanded the playing field” by incorporating blues, country and folk music into her work.

Growing up in Los Angeles, from a young age, Darynn Dean was taught by jazz singer Barbara Morrison and pianist Howlett Smith. No stranger to jazz, her grandfather, Donald Dean Sr., is a renowned drummer (Les McCann, Carmen McCrae and Eddie Harris), her father, Donald Dean Jr., is also a drummer (Kenny Burrell, Rickey Lee Jones). Now, Darynn has set her sights on taking her place in the family legacy and climbing the imposing mountain of jazz greats.

Each year, the Central Avenue Jazz Festival draws tens of thousands of people from across the United States. In addition to live performances by world-class favorites and up-and-coming artists, the local event includes pavilions focused on Arts; Health & Wellness; Youth & Families; and Business & Jobs. For more information and regular updates, visit www.centralavejazzfest.com. 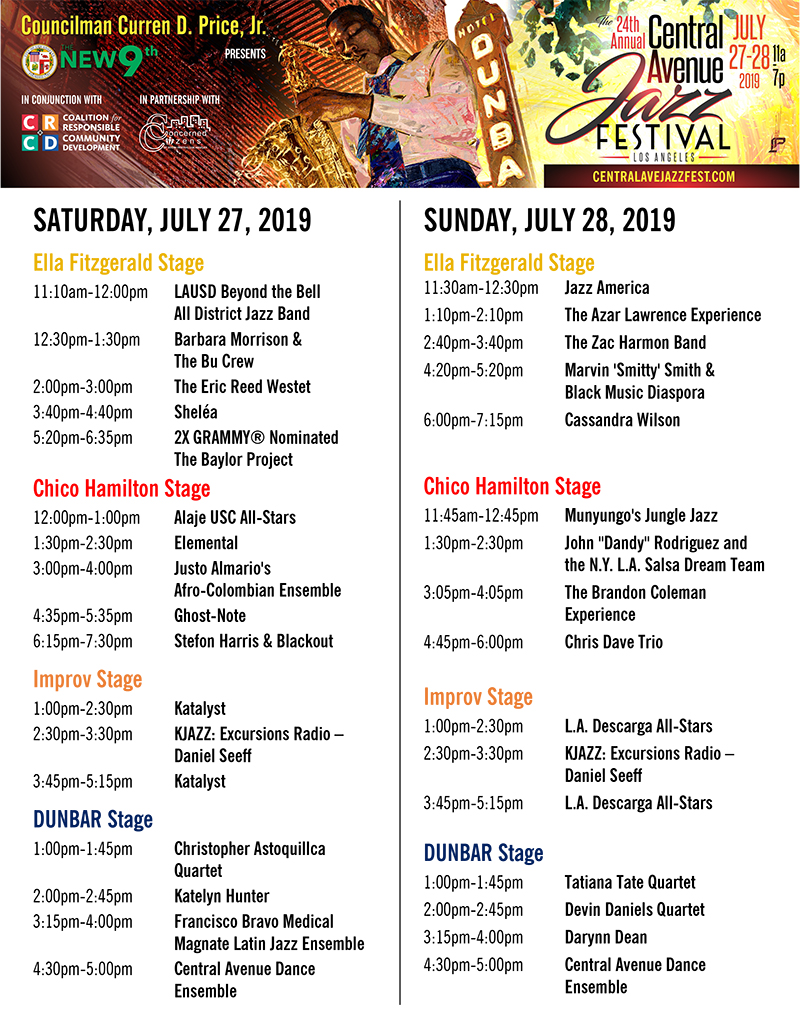 For the first time in it's history, the festival has partnered with local medical experts to host a series of workshops known as "Health Talks." To learn best practices and tips on how to improve your and your family's well-being, check the schedule below.