Posted by Connie Llanos on 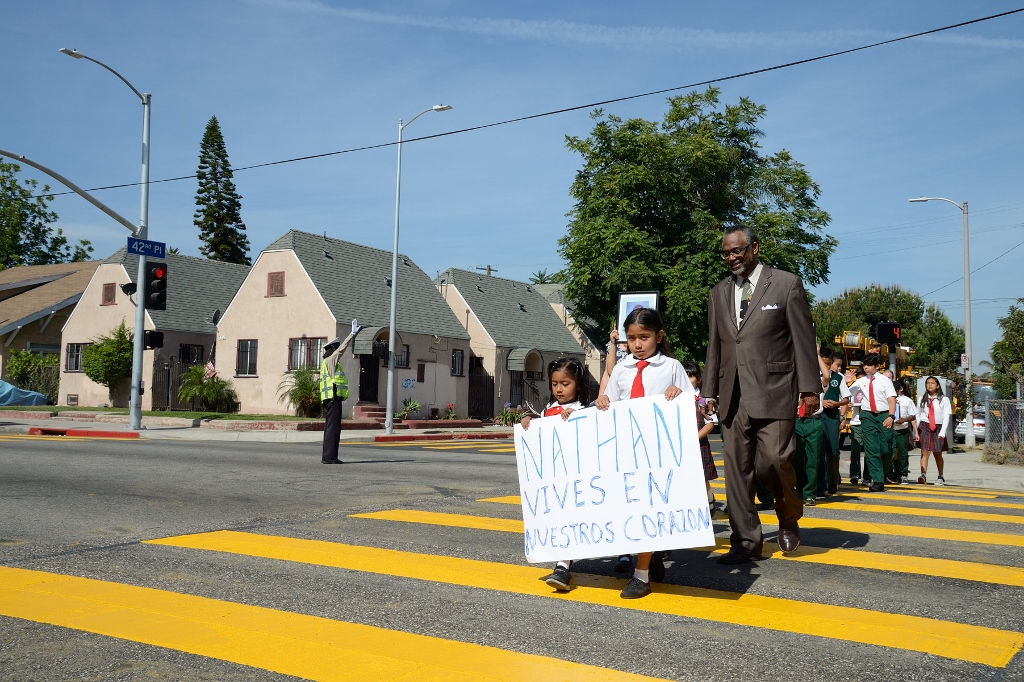 Ten months ago, 16 year old Nathaniel Mota was tragically killed at the busy intersection of Normandie Avenue and 42nd Place. He was on his way home from a church youth group meeting. The loss was heartbreaking to his family and this tight knit community, but Friday they gained some comfort in seeing Mota's memory honored with the installation of a long awaited traffic light.

" As an elected official, few things are harder than seeing an innocent child’s life cut short. I wish there was more I could do to help this family and this community heal from this heartache, but at least today, we can count this traffic light as a victory," said Councilman Curren Price.

Councilman Price said he was personally affected by Nathaniel's untimely passing, which took place a few short months after he took office. "I went to school down the street from here, and know first hand how dangerous this street can be," Price said.

Residents from the area began petitioning for increased pedestrian and traffic safety improvements some 5 years ago. Yaneth Palencia, Nathaniel Mota's aunt, said she had personally helped draft a letter to city officials urging them to study the intersection and bring needed upgrades.

On Friday, Yaneth said while it was incredibly difficult to accept that her nephew's son had been claimed by that same unsafe intersection, but she felt tremendous satisfaction in knowing that something good had come of "so much tragedy."

"This is a bittersweet moment for our family for obvious reasons...Nathaniel would have been graduating high school and going on to college this month...but we are very grateful to see this light now installed," Palencia said.

Original estimates from the Los Angeles Department of Transportation said the light installation would take at least two years to complete, but Assistant General Manager Selwyn Hollins said his staff quickly understood that timeline would not be accepted by Councilman Price or the community.

More than a year ahead of schedule, Hollins said the new light signal will now help residents cross the street safely.

The installation couldn't have come sooner for Father Jorge Ochoa, of Santa Cecilia Church, who also celebrated the moment as a shining example of the great things that are made possible when a community joins together.

"There was tremendous tragedy here, but our civic leaders heard our pleas and our pain and together we made this happen," Ochoa said.

" The light should serve as a constant reminder to us, that we must always work together to bring positive change to our community."