Pathfinders Celebrate with a "Grad and Go" 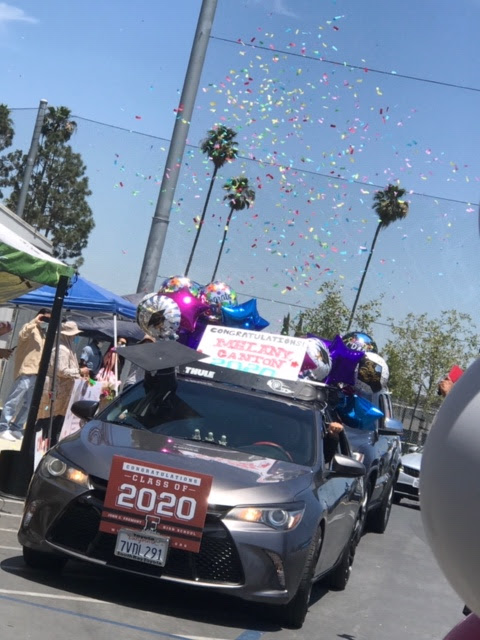 On Friday, June 12, seniors from John C. Fremont High School ended the school year and celebrated their rite of passage at the first ever “Grad and Go” graduation ceremony.

Students were able to drive onto campus along with their families, friends and in some cases pets to receive well wishes from their teachers and obtain their diplomas from Principal Blanca Esquivel along with a special certificate from Councilman Curren Price.

“This has been a challenging time for schools, administrative staff, teachers and students but they have adapted well and have found creative ways to celebrate this important milestone in the students' lives,” said Councilman Price. “Although the school year is ending, the memories of what they did to make it to this day will forever be remembered.” 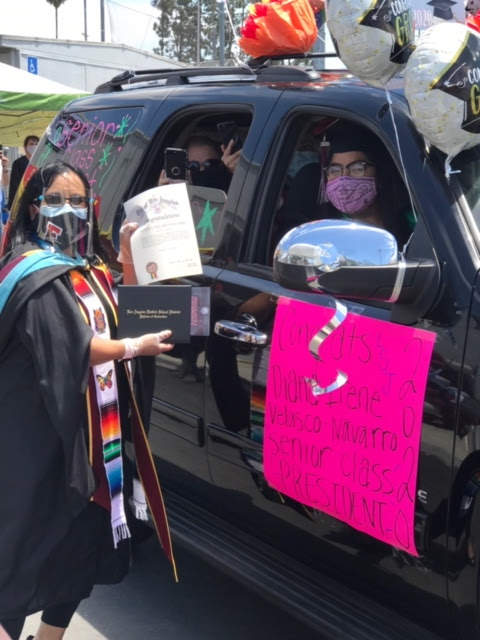 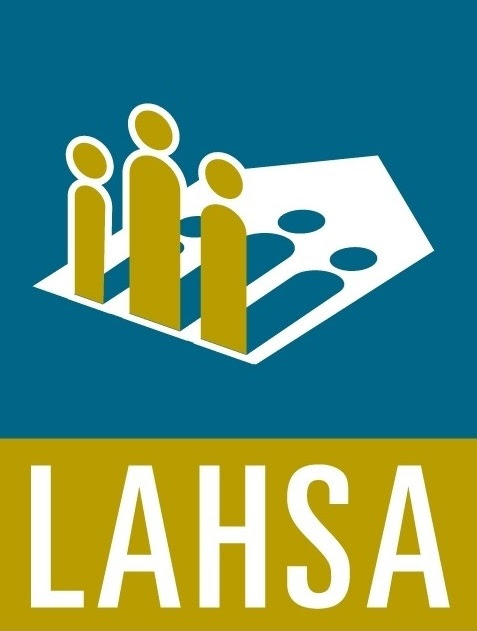 On Friday, June 12, the Los Angeles Homeless Services Authority (LAHSA) released the 2019-2020 point-in-time count for the number of people experiencing homelessness in Los Angeles County. The numbers reveal a 14 percent increase of Angelenos that have fallen into homelessness bringing the total to 41,290 individuals.

The recent data shows an increase across the board in all categories, including families, seniors, veterans and youth. The causation is a direct result of housing affordability in Los Angeles as there are simply not enough affordable housing units available to meet the demands of the City. With over 550,000 rent burdened households in the Los Angeles region, nearly the same amount of units need to be created to satisfy the need.

In addition to LA’s inadequate housing supply, systemic racism and income inequality are drivers of homelessness showing that although 8 percent of the overall population in Los Angeles County is Black, they account for more than 34 percent of those experiencing homelessness.

“Homelessness is something that plagues our Black communities; these are not just numbers, these are people, these are members of our community who have fallen on hard times in an inflated market,” said Councilman Curren Price. “In District 9, I am pleased that we are on track to add more than 1,200 units of affordable housing and 814 units of Permanent Supportive Housing (PSH), but we need more creative solutions such as ‘A Bridge Home’ and ‘Project Roomkey’ going forward to house more people and win the battle.”

Earlier this year, Councilman Price championed the construction of the first “A Bridge Home” project in District 9 called “Bringing Hope to Hope Street,” which can house up to 100 homeless men and women from the community and help them transition into a stable home. Due to COVID-19, the shelter is working at a reduced capacity to maintain social distancing protocols. Two additional homeless shelters are planned for CD 9.

The COVID-19 Recovery Plan, which includes “Project Roomkey,” a program initiated by Gov. Gavin Newsom, places the most vulnerable population into hotel rooms. The program has allowed LAHSA to shelter over 4,000 people through Project Roomkey in the three months since the “Stay at Home'' order was implemented in March 2020. Currently, there is one “Project Roomkey” facility in District 9.

On Wednesday, June 10, Councilmembers Curren Price and David Ryu co-presented a motion demanding an investigation of the tactics the LAPD used during what began as a peaceful protest on Saturday, May 30 near Pan Pacific Park and the Fairfax District.

“The disturbing images and videos of peaceful protesters being brutalized by members of the LAPD demands swift action and a comprehensive review of the excessive force used against Angelenos who were simply utilizing their constitutional right to demonstrate,” said Councilmember Price. “While this is but one specific instance, it reveals a clear need to reassess current departmental protocols for crowd control and de-escalation. The use of rubber bullets, tear gas and batons against demonstrators while dispersing the crowds not only exhibit actions that were aggressive but potentially lethal and requires answers.”

The motion asks for an in depth review and explanation of crowd control strategies and use of force tactics at the May 30 demonstration from the LAPD, the independent Office of the Inspector General, and the Department of Civil and Human Rights. The motion also seeks independent investigations of the use of less-than-lethal weapons, complaints filed against LAPD for use of excessive force in dispersing peaceful demonstrators, as well as claims of LAPD not intervening against acts of arson, looting and vandalism.

Also on June 10, the LAPD announced that they have launched their own independent investigation into the allegations of misconduct and have assigned 40 investigators looking at 56 complaint investigations, with 28 involving alleged uses of force. At this time, seven officers have been assigned to non-field duties.

For complaints related to the protests, email ProtestResponse2020@lapd.online. Individuals can also make a complaint through the Office of the Inspector General at (213) 893 6400 or oigcompl@lapd.online

Any person who believes they were wrongfully accused of a crime, unjustly injured, or experienced misconduct on the part of an officer can make a complaint with the Department's Internal Affairs Group hotline at (800) 339-6868.

Testing for COVID-19 Expands to Seniors in CD 9 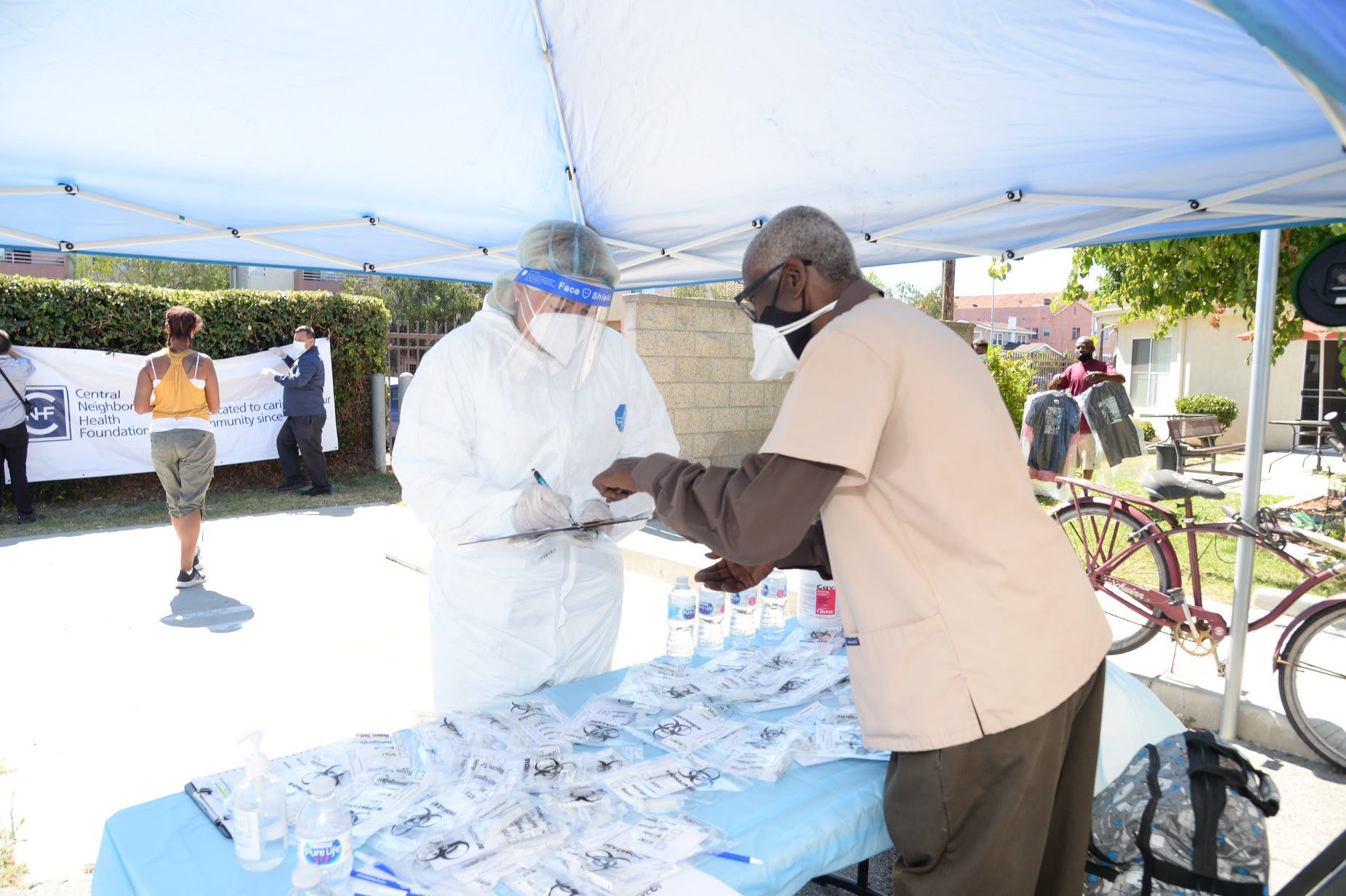 During the week of June 8, the Office of Councilmember Curren Price joined forces with the Los Angeles Fire Department and Central Neighborhood Health Foundation (CNHF) in District 9 to bring COVID-19 testing to Figueroa Senior Housing. The latest effort is part of Councilmember Price's ongoing commitment to organize pop-up community COVID-19 testing events in his District.

Councilmember Price is on a mission to increase coronavirus testing access to all the senior residential facilities in the District, with the overall goal to have 90 people of residents districtwide tested.

“I want to make sure we do everything we can to protect those populations who are most vulnerable to the virus, which includes our elderly community,” added Councilman Price. Click on the photo below to view the video of the launch of Councilman Price’s campaign to keep our seniors healthy and the South LA community safe. 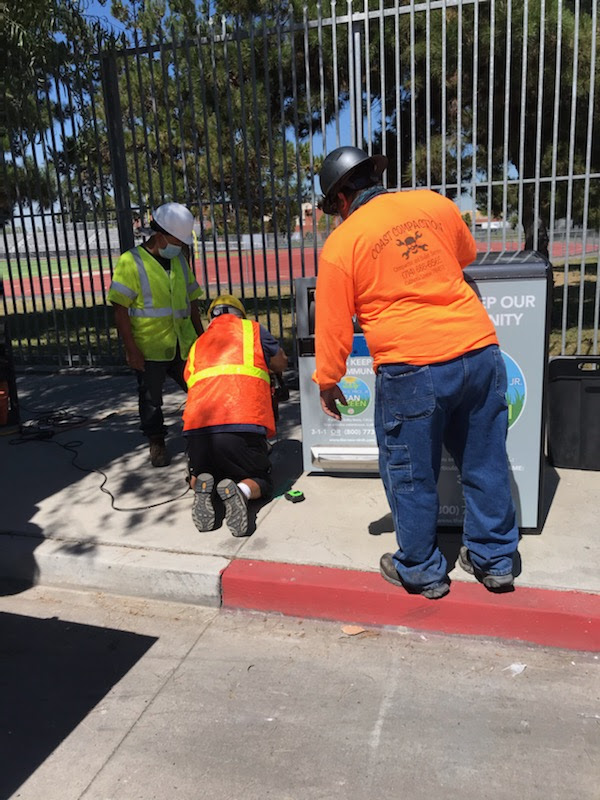 District 9 is about to get more clean and green! Approximately 30 Bigbelly smart waste containers were installed during the week of June 8 along major corridors in the District, including Manchester Avenue, Martin Luther King, Jr. Boulevard and Figueroa Street.

Since taking office in 2013, Price has worked tirelessly to uplift the District as part of his “Clean & Green” initiative—orchestrating hundreds of community clean-ups and directing resources to remove trash, bulky items and illegally dumped items from alleys and neighborhood streets.

“South LA children, families and seniors deserve to live in a clean and healthy environment,” Councilmember Price said. “Over the years, we have made important strides and we look forward to doing more to improve the quality of life in our neighborhoods. The new Bigbelly stations will have a positive impact on our daily lives and throughout our community.” 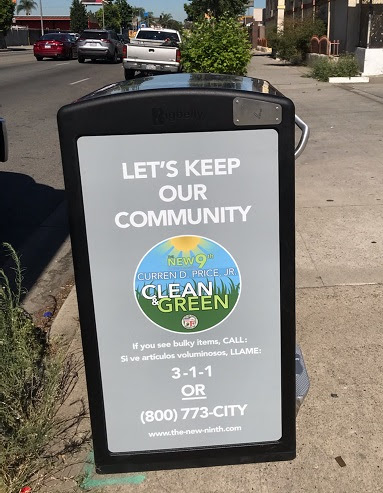 On Saturday, June 6, Councilman Curren Price joined thousands of demonstrators at Leimert Park for a peaceful protest in honor of George Floyd and the many Black lives lost in police encounters and other racial violence.

“There was an air of solemness and comfort throughout the crowd,” said Councilman Price. “I stood side by side with LAPD Chief Michel Moore in solidarity for the 8 minutes and 46 seconds that represented the length of time the knee of disgraced Officer Derek Chauvin was on George Floyd’s neck. It was a heart wrenching moment, painful to think of how he and so many others have been murdered for no other reason but for the color of our skin.”

From the LGBTQ African American woman to the Latina mother with her son, college educated millennials and law enforcement across the ranks, the wave of protests held in Los Angeles and around the world have been filled with people from all sides of the globe demanding complete equality, inclusion and justice for all.

“There is a lot of work that needs to be done, souls need to be healed and promises need to be kept,” added Price. “We must seize this opportunity to advance our society into a more tolerant and balanced system; it is our duty to do right by our neighbors, not turn our backs on each other, and march forward toward progress.”

The Office of Councilmember Curren Price would like to congratulate the graduates of the Class of 2020. Having to overcome tremendous adversity, hardships and challenges, your accomplishments will be cemented in history as the class that could do anything they put their minds (and hearts) to.

As you get ready to end the school year with virtual culminations, festive parades and family celebrations, remember the lessons you have learned inside and outside of the classroom.

“Graduates, you represent the new generation of South LA filled with much promise,” said Councilmember Price. “In a time when the world stopped, you kept going. Your determination, adaptability and focus led you to this milestone. You proved that nothing, not even a global pandemic, could stop you. Harness the power of this moment and let it catapult you toward your dreams and aspirations."

***Click on the image above to see a special message from Councilmember Price to District 9 graduates and their families.

Warmest congratulations to some of the local Valedictorians and Salutatorians below. Best wishes for your next adventure and make CD 9 proud.

Raising the Voices of Future Leaders

Among the questions the next generation of leaders asked were: "Why do you personally think this generation of youth decided to fight back as hard as we have?" and "Do you see any differences from the race riots back in the '60s compared to now?"

The livestream, which was broadcast on Channel 35 and on Councilman Price’s Facebook page @CurrenDPriceJr, can be viewed by clicking the photo below.

Councilman Price Advocates for Small Businesses in Response to COVID-19

On Tuesday, June 2, Councilman Curren Price introduced two motions dedicated to assisting small businesses and non-profits left behind by federal loans and other assistance in response to COVID-19.

One proposal calls for an additional $30 million to replenish the city’s Small Business Emergency Loan Program. In March, Councilman Price advocated for $11 million in funding to create the program, which provides no-fee loans between $5,000 and $20,0000, with a zero percent interest rate and repayment deferred up to six months. As of May, the Economic & Workforce Development Department had received nearly 4,000 applications, showing the desperate need to serve as many local businesses that have had to endure closures, layoffs and loss of revenues.

The relief and recovery fund would be a collaboration between the city, county, philanthropic organizations and financial institutions. It aims to assist businesses with fewer than 20 employees, many of which were shut out of federal loans. Recent data shows that currently more than half of the county is without a job due to COVID-19. The motion asks for a $4 million commitment by the city to launch the program.

The two proposals will be reviewed next by the city’s new Ad Hoc Committee on COVID-19 Recovery and Neighborhood Investment, which Councilman Price is a member of.

Civil Unrest Lies in the Open Wounds of the Unheard

While in the midst of a global pandemic, recent events happening across the country have forced us to face another virus head on, the virus of systematic racism. Innocent lives have been sacrificed, most recently in the deaths of George Floyd, during a blatant and gross abuse of power by a police officer in Minnesota, Ahmaud Arbery, chased down while jogging down the street in Georgia, and Breonna Taylor, a first responder in Kentucky gunned down while she slept.

During this time of civil unrest, we stand in solidarity with the victims' families and loved ones. As brothers and sisters we are united in the grief of too many lives lost, and we demand accountability and justice and total inclusion of our black and brown communities.

Within our hopes for a more peaceful and just society lies the next generation of leaders in the wings ready to fly. Don't let the seeds of anger consume you; instead, remain rooted in love and hope, as one.

Be safe and take care of one another,