This Summer will Sizzle with the Sounds of Jazz

Posted by Brenda Contreras · April 11, 2018 5:35 PM
It may be spring, but we are in full swing planning for our 23rd Annual Central Avenue Jazz Festival this summer.
Want to know more? This year there will be more of an emphasis to showcase the diversity within the jazz genre. We have surprises ahead so stay tuned for future updates by visiting www.centralavejazzfest.com/
_

In its heyday, South Park was the place to be for children, families and seniors in South Los Angeles. Well, we’re about to bring back the glory days of this community jewel.

We have some big plans underway with the City of Los Angeles Department of Recreation and Parks. It starts next week with a community meeting, followed by a groundbreaking ceremony.

Read all about it below. 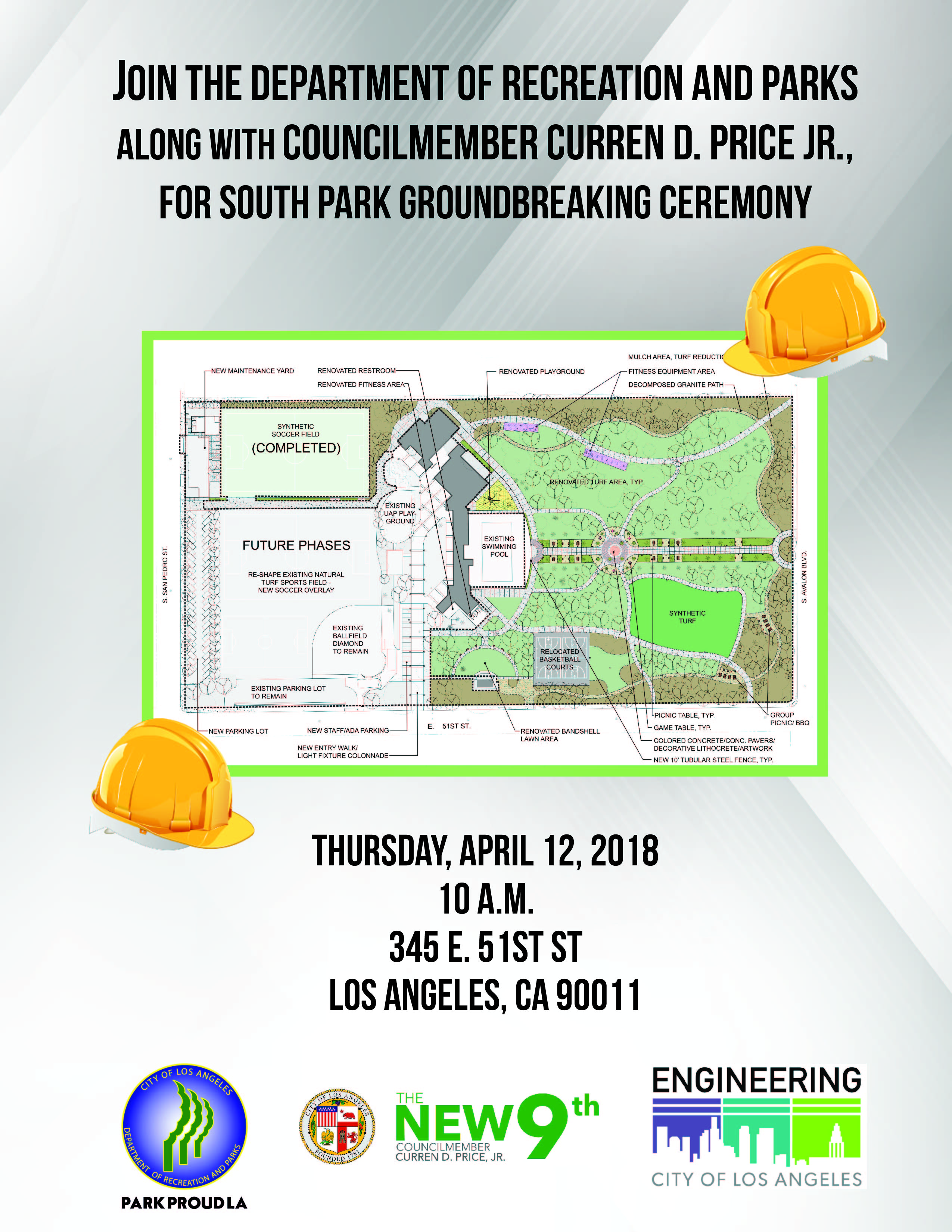 The Search for the Next Chief of LAPD

Councilmember Curren Price, in collaboration with Los Angeles City Council President Herb J. Wesson, Jr. and City Councilmember Marqueece Harris-Dawson, is inviting the public to a Community Meeting to provide input on the selection of the next Chief of Police.

Your opinion matters. What do you want to see from our next Chief of Police? Details below. 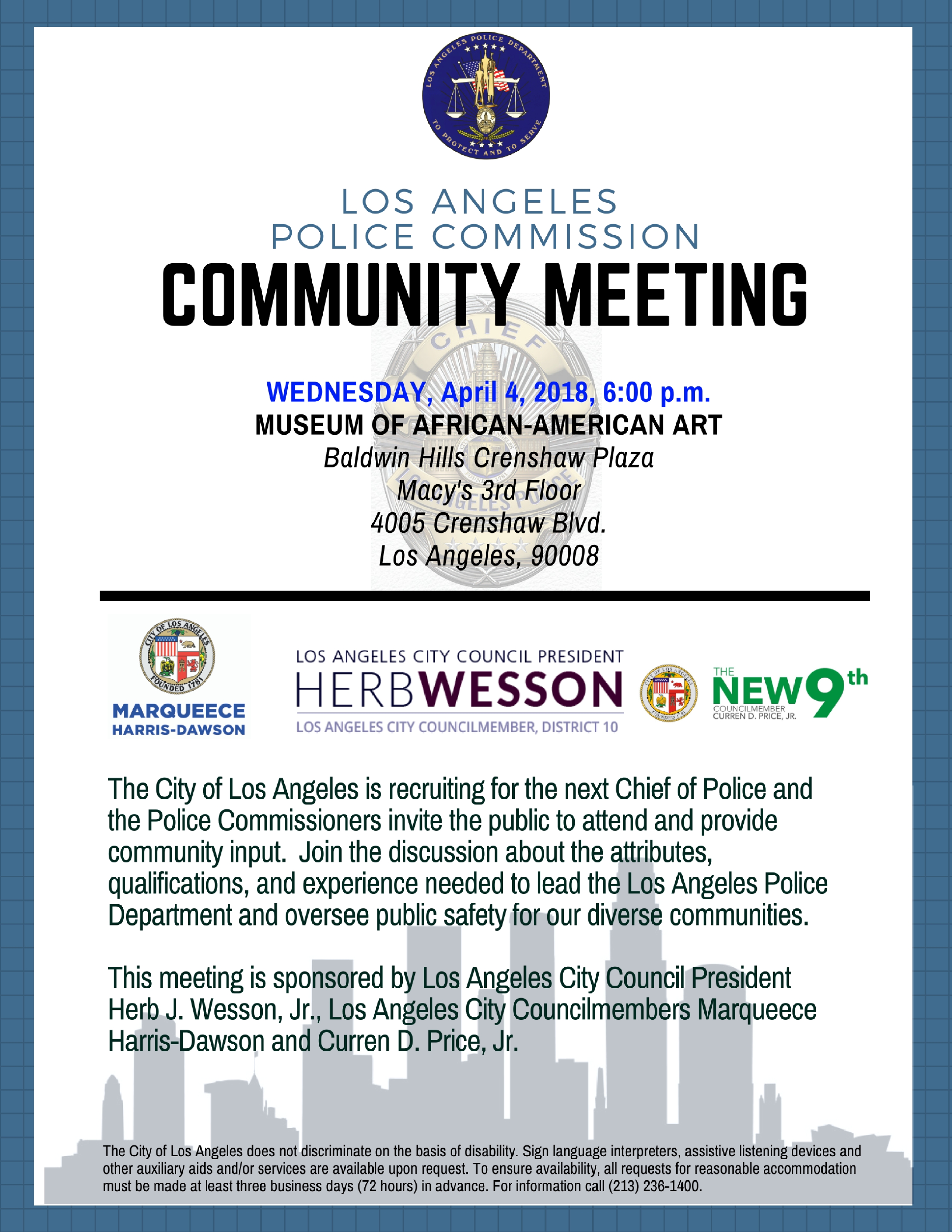 Under Councilman Curren Price's leadership, the City recently launched a mobile toilet and hand washing station in the Ninth District to combat the growing number of Hepatitis A cases among the homeless community. The “mobile pit stop” is dropped off each morning at 7 a.m. and picked up at 7 p.m., with an attendant stationed there throughout the day. Since March 6, it has received an average of 19 visits per day. The station is funded for six months.

It is one of several throughout the City in areas with large numbers of homeless but few (if any) hygiene facilities. Hepatitis A is a highly contagious viral infection whose spread is effectively prevented by frequent hand washing.

To learn more about local services and housing for the homeless, contact Councilman Price's District Office at (323) 846-2651. 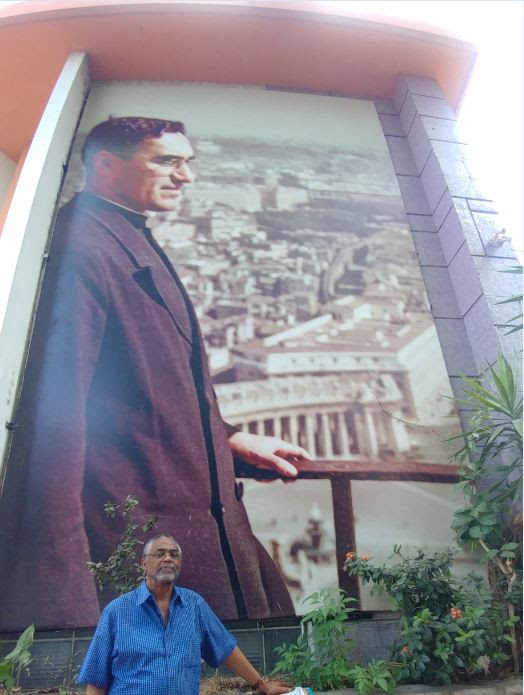 To mark the 38-year anniversary of slain Salvadoran Archbishop Oscar Romero, the City of Los Angeles declared March as the month of remembrance for the beloved advocate of the poor and oppressed.

Councilman Curren Price presented the resolution on March 23 to Carlos Vaquerano, executive director of the Salvadoran American Leadership Education Fund (SALEF) who also serves as board president for Clinica Romero. To read the resolution, click here.

“We honor Archbishop Oscar Romero for his values, principles and relentless pursuit to build a more equal society for everyone,” said Councilman Price. “We celebrate his teachings, beliefs and life's work. His message of hope, compassion and justice is as relevant today as it was during the Civil War of El Salvador.” 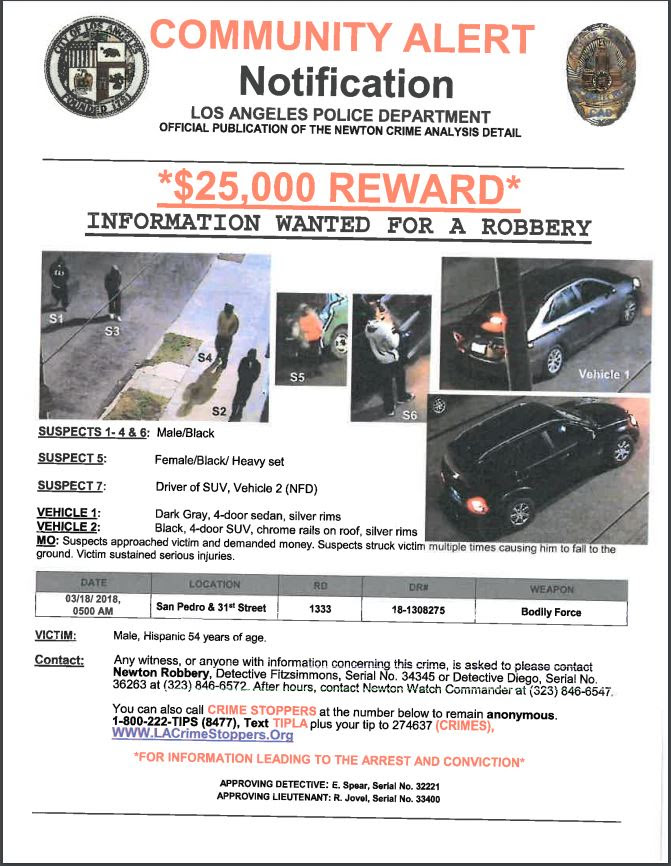 -
Councilman Curren Price announced a $25,000 reward for information leading to the identification, arrest and conviction of the persons responsible for the vicious beating and robbery of a 54-year-old peanuts and coconuts street vendor who was brutally attacked at the corner of 31st and San Pedro Streets. Two other vendors were also assaulted but sustained lesser injuries.
In the early hours of March 18, as Pedro Reyes set up his stand for an honest day’s work, criminals robbed and beat him mercilessly. Councilman Price was joined on March 21 by members of the LAPD Newton Community Police Station and family of Pedro Reyes to ask for the public's help.
Any witness or anyone with information regarding this crime is asked to contact Newton Robbery Detective Fitzsimmons or Detective Diego at (323) 846-6572. For after hours, please call (323) 846-6547. To remain anonymous, please call Crime Stoppers at (800) 222-TIPS or 8477. You can also text TIPLA to 274637.
-

Historic Groundbreaking for the $1-billion Lucas Museum of Narrative Art

George Lucas, Mellody Hobson and Steven Spielberg stopped by South Los Angeles earlier today to greet a few hundred local dignitaries, community partners and friends in celebration of the historic groundbreaking for the $1- billion Lucas Museum of Narrative Art.
The Lucas Museum, which found its forever home at Expo Park in the heart of CD 9, will allow visitors to experience the power of narrative art across all mediums, including painting, illustration, comic art, photography, film, animation and digital art. The 300,000 square foot non-profit museum will feature collection galleries and exhibition spaces displaying original works of art from world renowned artists, cutting-edge digital technologies and daily film screenings in two state-of-the-art theaters. It will also provide much-needed access to arts education and programming for our local youth. Thank you for choosing CD 9 to be the permanent home of the Lucas Museum; we’ve been waiting for this opportunity a long time! 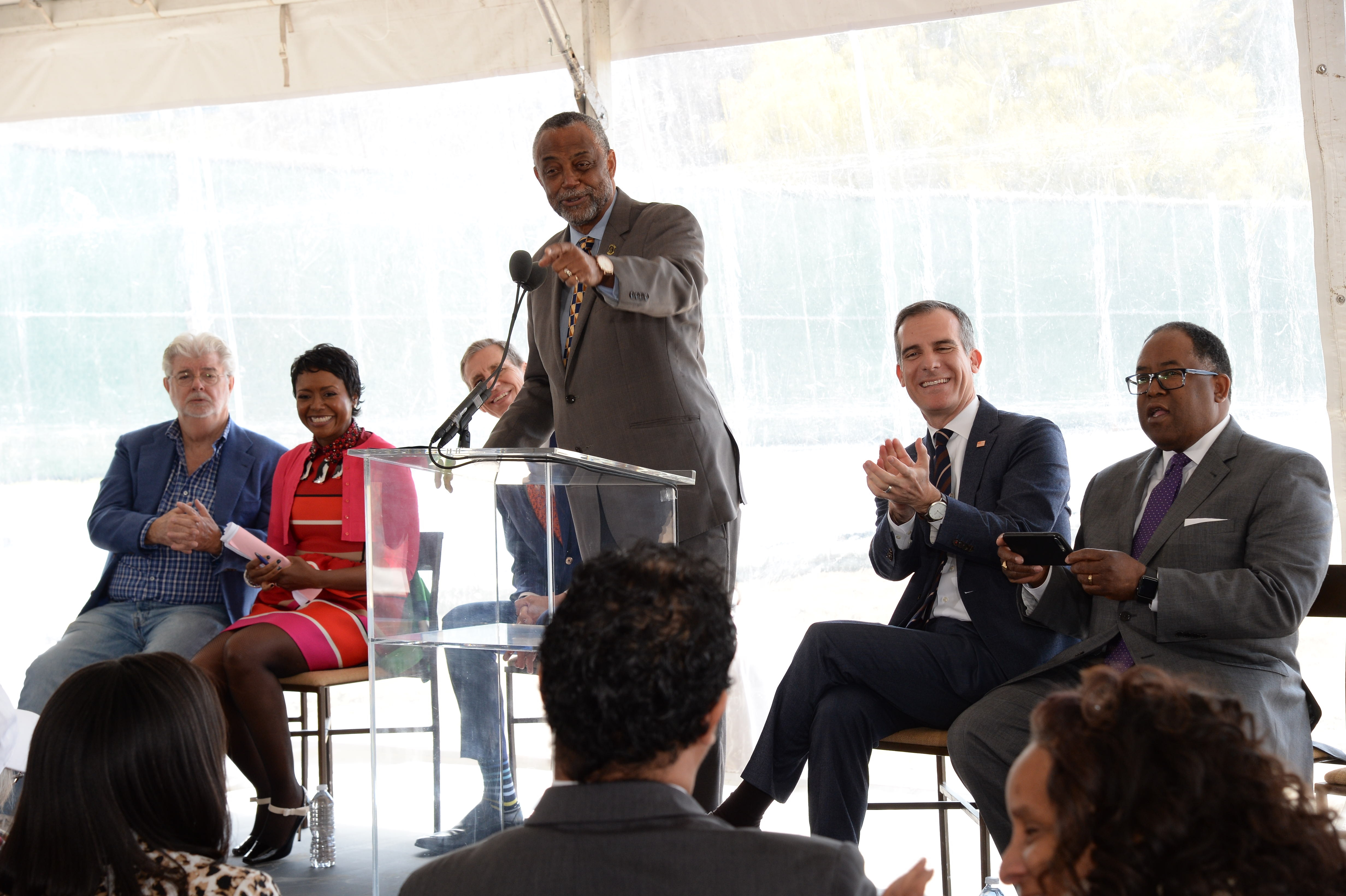 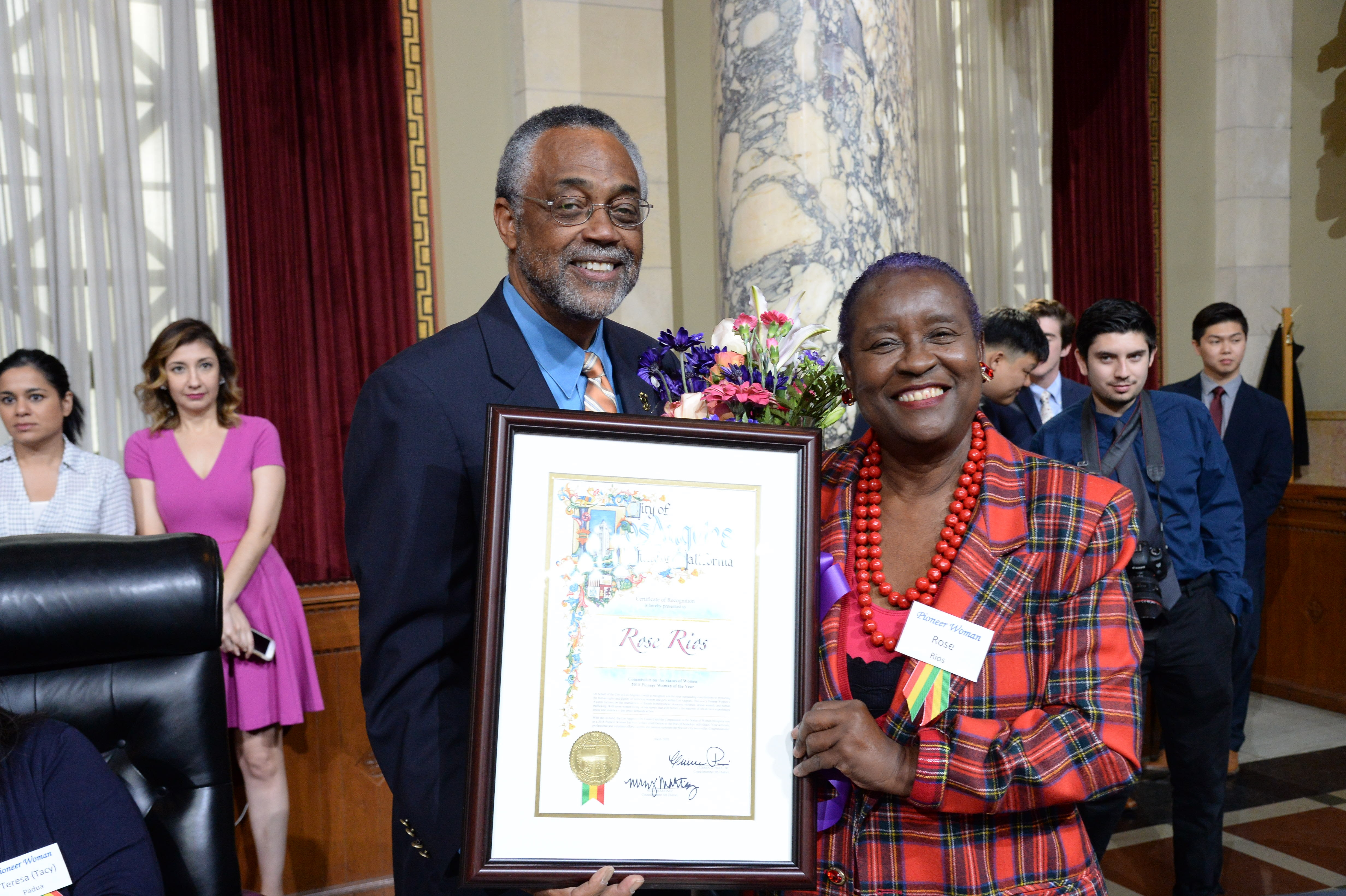 For Women's History Month allow me to introduce you to Rose Rios, selected as this year’s Ninth District Pioneer Woman.

Rose is a proud Afro-Cuban American, and the Founder and CEO of Cover the Homeless Ministry, a nonprofit dedicated to aid the City’s homeless population. Her organization helps provide everything from meals, to clean clothing, hygiene products and a safe place to sleep.

Rose was born in Lexington Mississippi to sharecroppers and was one of nine children living in a one bedroom home. Her family moved to California in 1951 where her lifelong community service started. Following her parents example, Rose dedicated herself to giving back to the community.

Rose is a tireless volunteer, who has dedicated her life to humanitarian efforts from fostering children to caring for the elderly. Today, she also makes time to be on the Board of the South Central Family Health Center and continues to be dedicated to those in need.

Women like Rose drive change in their community and inspire hope for the future. To women, everywhere. ¡Que vivan las mujeres! 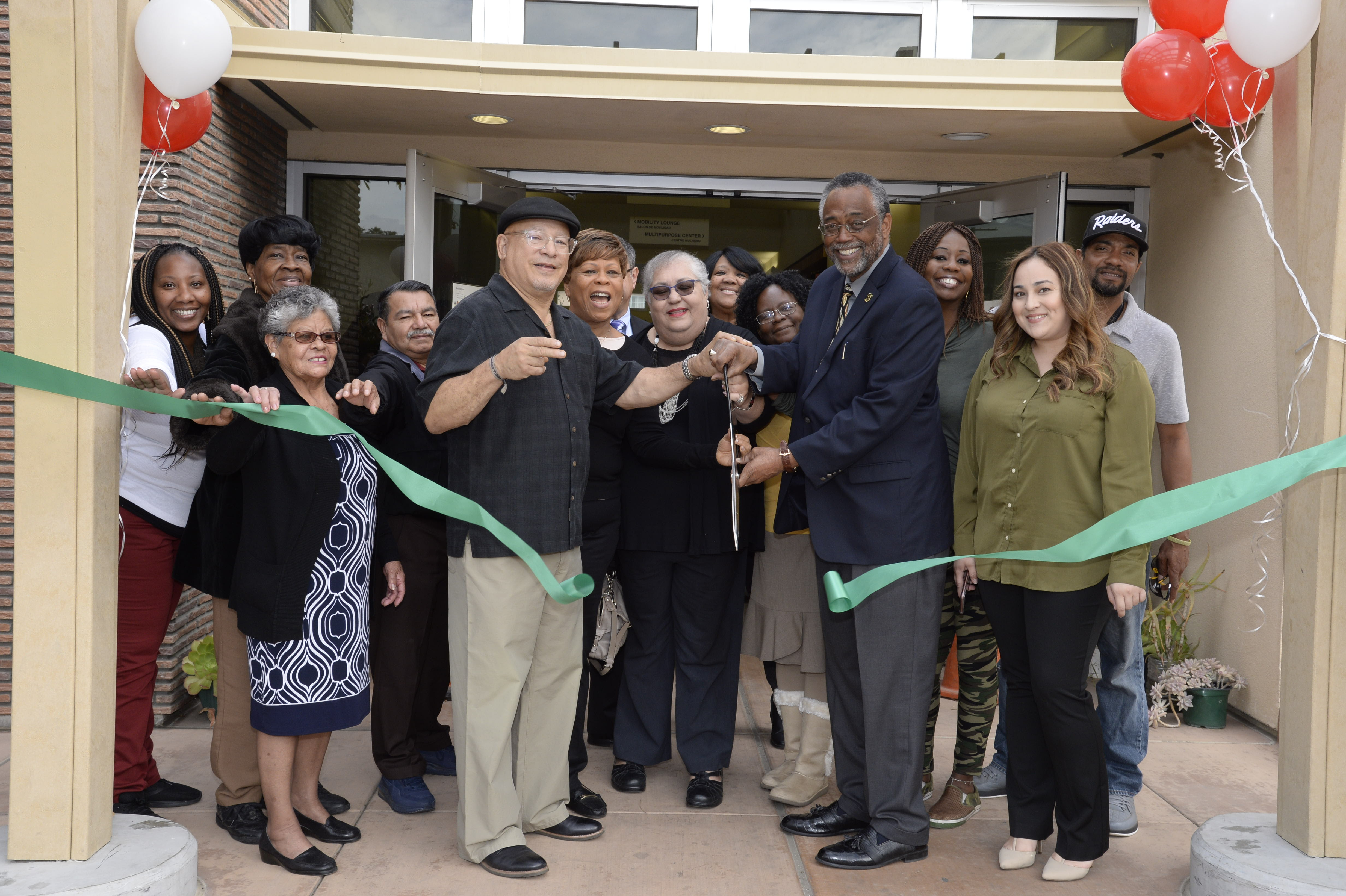 Councilman Price recently secured a historic, annual budget allocation of nearly half a million dollars for the center, allowing older adults in the community to benefit from a variety of free services, including:

“Today, more than half a million people age 60 years old and older live in the City of Los Angeles,” said Councilman Price. “I’m deeply committed to honoring our older adult population and making South LA a more vibrant community for all ages.”

The Estelle Van Meter Multipurpose Senior Center will also provide CalFresh and Medicare enrollment on-site. As a result of the budget allocation, the center will offer free transportation for local seniors to get to doctor appointments or go grocery shopping, among other things. 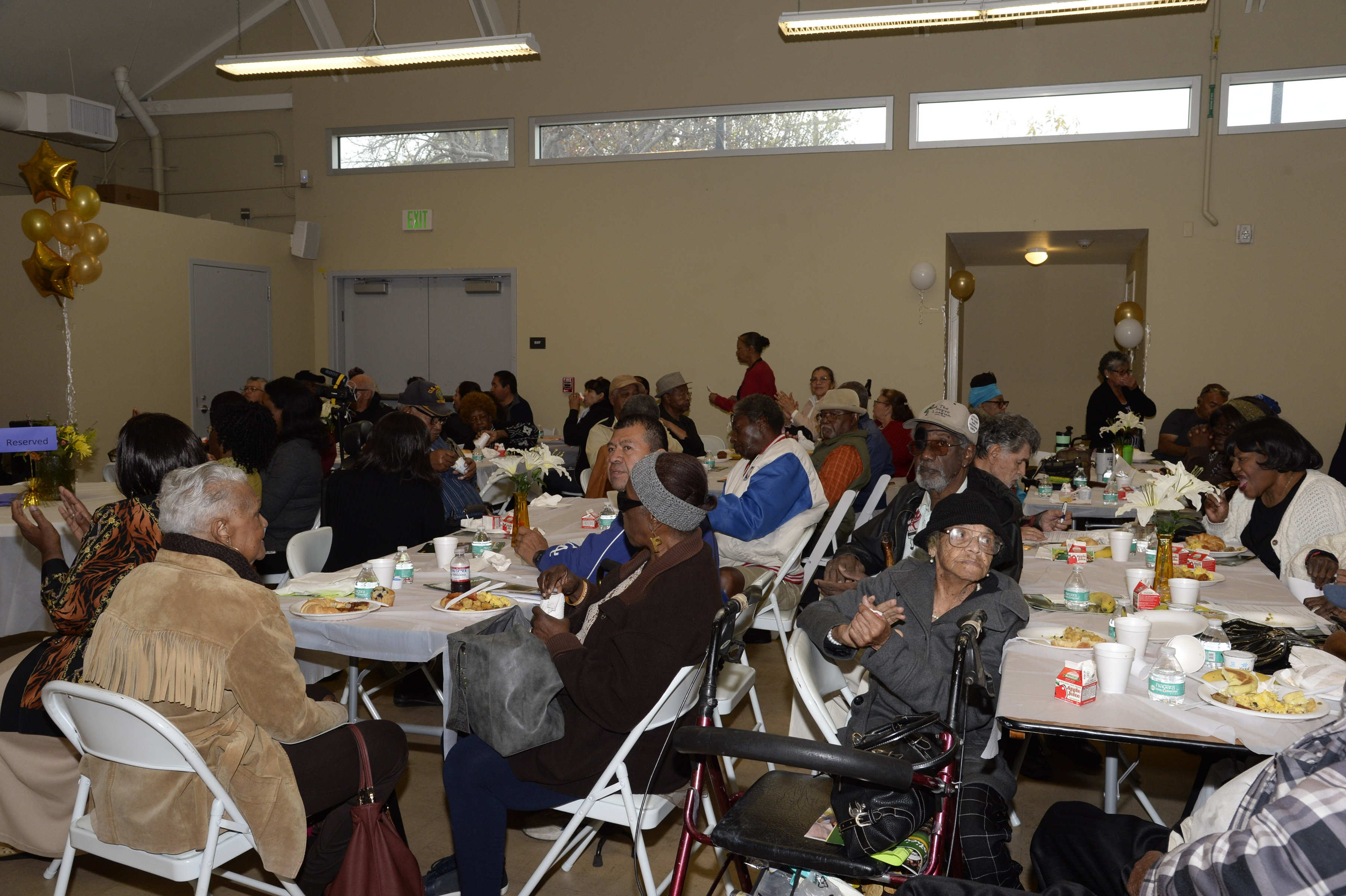 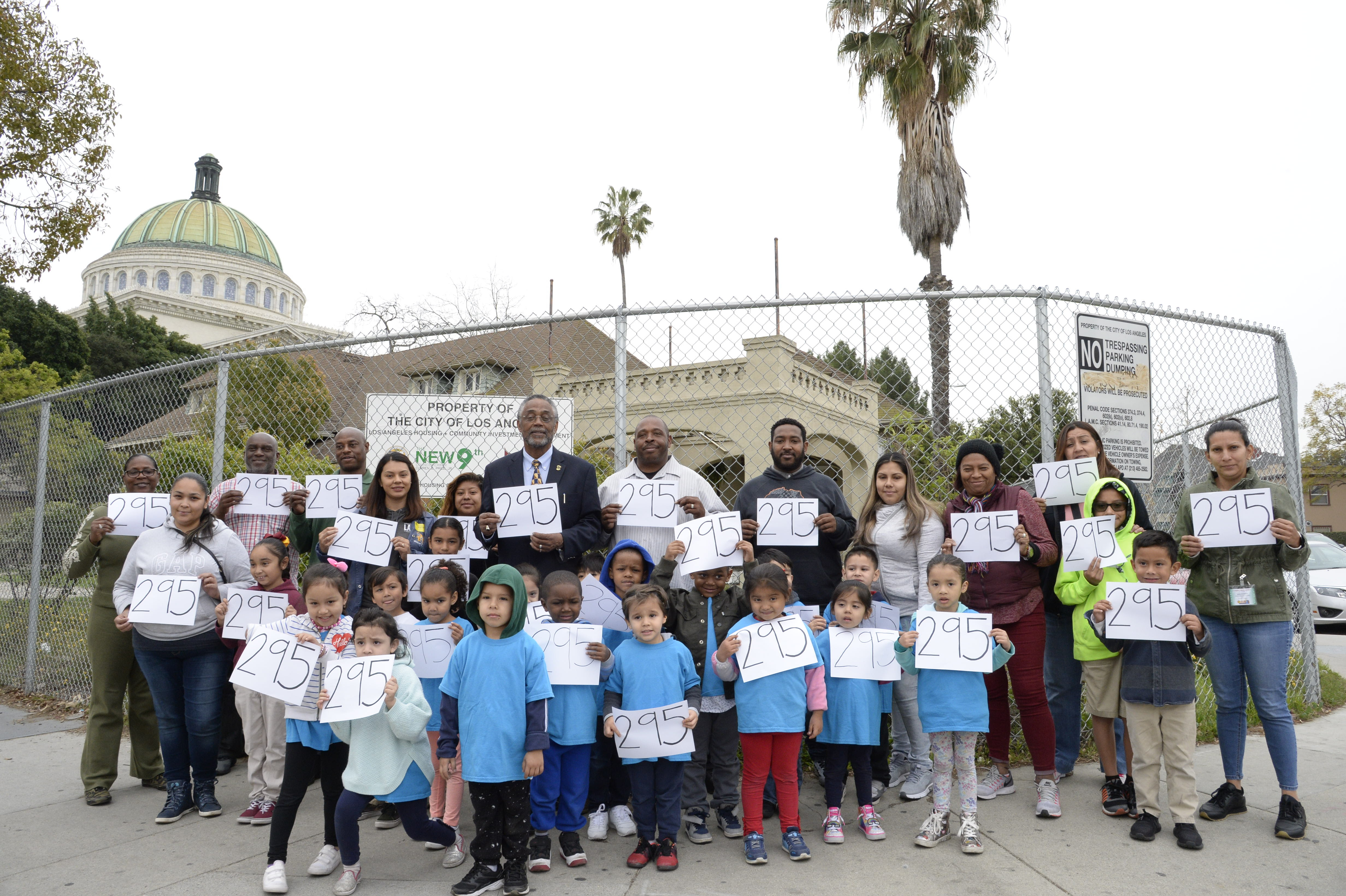 As of March 2018, Councilman Curren Price had committed to building 295 new units of permanent supportive housing in the 9th District. Half of those units are scheduled to be completed by 2020.

Earlier this week, Councilman Price was joined by dozens of community members in front of Casa de Rosas—a dilapidated, century-old home on the federal registry of historic places that is currently undergoing repairs to provide future housing for homeless veterans.

"This is only a snapshot of what we’re doing in the 9th District to lift families, veterans and foster youth living on our streets,” Councilman Price said. “I applaud my Council Colleagues who pledged to support a minimum 222 units of homeless housing in their respective Districts to ensure they are built in communities across Los Angeles. We all bear the responsibility to help restore the lives and dignity of our homeless brothers and sisters."