On June 27, 2018 the Los Angeles City Council confirmed the appointment of Assistant Chief Michel Moore to be the next Chief of Police.

I asked him poignant questions about police relations in minority communities; the recruitment of people of color and women; and asked how he was going to regain the trust of the community, young men of color specifically.

Chief Moore assured me and the Los Angeles City Council that he is committed to improving police relations and creating a strong foundation for future leaders to build on. He spoke about the Cadet program and making sure youth have positive interactions with police officers at a young age. He also talked about training sensitivity being fundamental from the top brass to the rank and file.

I look forward to working with our new police chief to improve the conditions of South Los Angeles, and every Angeleno. 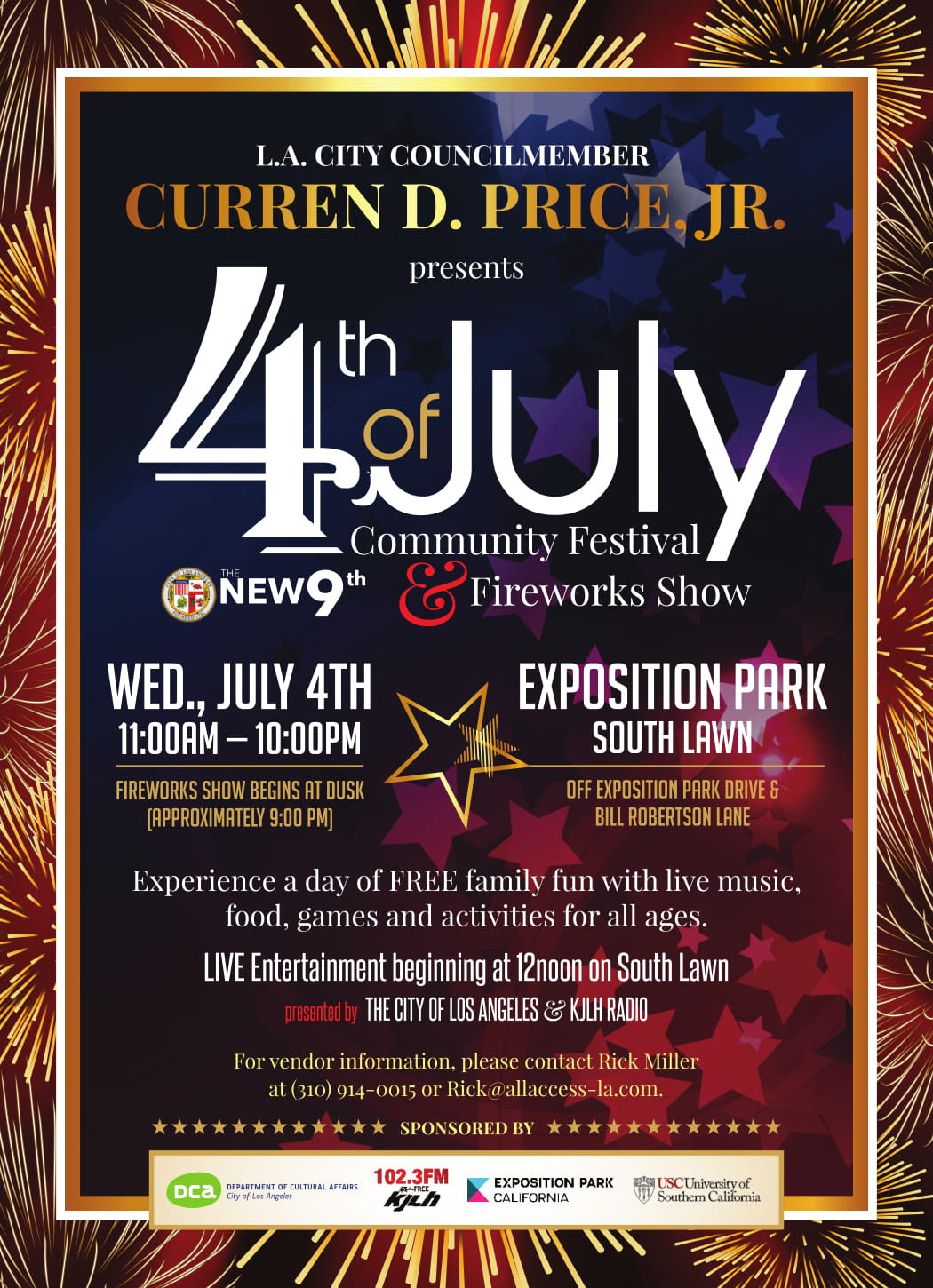 The 4th of July Community Festival and Fireworks Show will return to Expo Park at the South Lawn. Join host Councilman Curren Price and tens of thousands of friends and neighbors as we ignite LA's skyline and launch a pyrotechnic celebration on Wednesday, July 4.

In preparation of the local Independence Day celebration, here are some pointers to help you make the most of your experience:

2. Early arrival is suggested. There will be live music, food and family-friendly activities beginning at 11 a.m. so make sure to make the most of your day.

3. Don't forget to pack a blanket and sweater for the evening. Remember, the fireworks extravaganza will come to life at dusk, around 9 p.m., so you'll want to be cozy when the main attraction begins.

Please note, live entertainment will begin at 12 NOON presented by the City of Los Angeles & KJLH Radio. See below for details.

Lastly, if you're a vendor interested in having a booth at this year's festivities, please contact Rick Miller at (310) 914-0015 or Rick@allaccess-la.com. 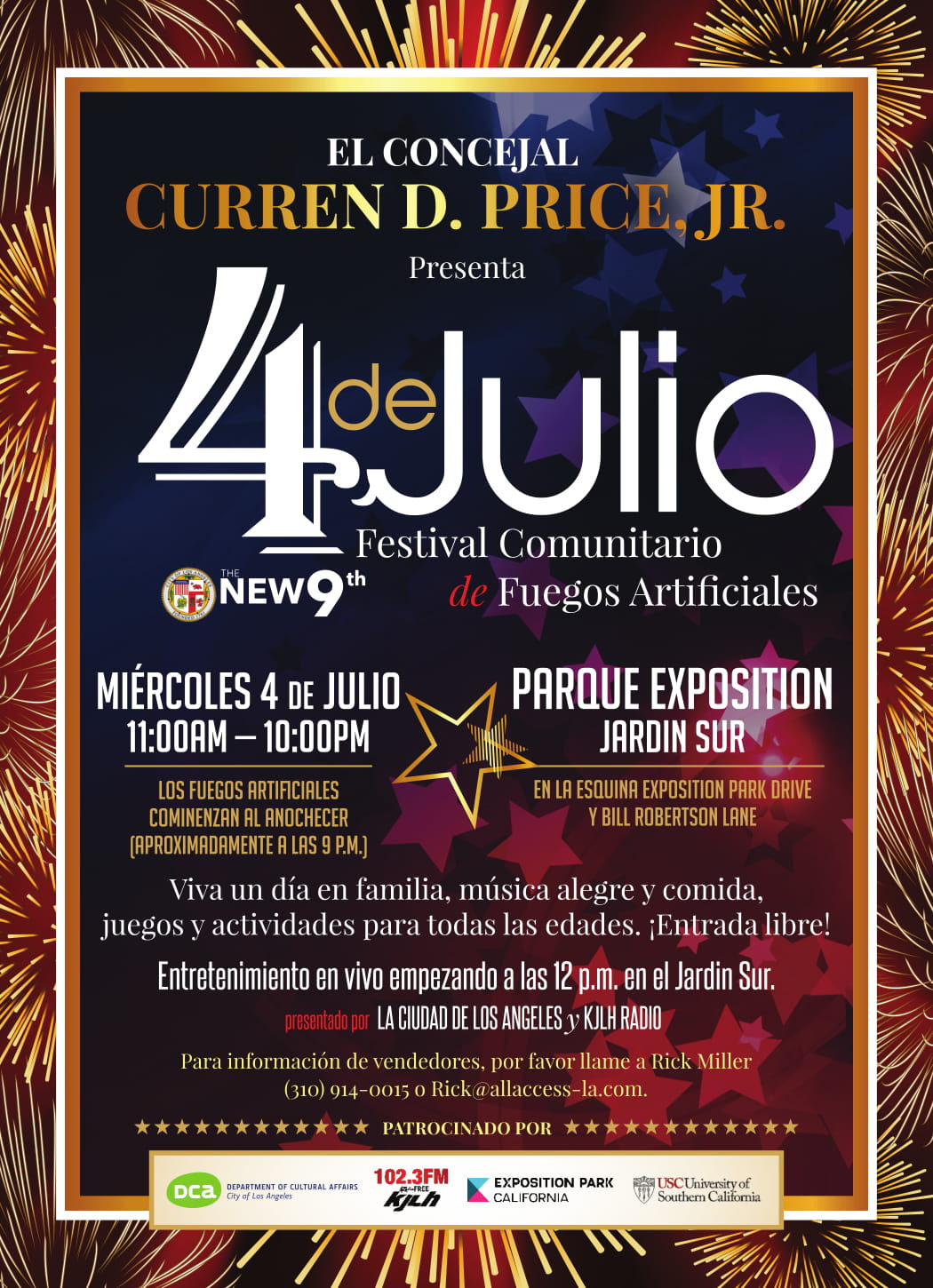 LOS ANGELES—Legendary artists Betty Bryant and the Pete Escovedo Orchestra are among the dozens of performers taking the stage at the 23rd Annual Central Avenue Jazz Festival July 28-29. For more than two decades, the FREE music festival has been a staple for the South Los Angeles community, celebrating the region’s rich cultural past and turning the spotlight on what was once considered the heart of the Jazz scene.

Held along Central Avenue between King Boulevard and Vernon Avenue, the citywide signature event features back-to-back concerts from 11 a.m.-7 p.m. on three stages throughout the weekend. This year’s lineup includes a wide array of musicians, including:

Pete Escovedo Orchestra/Legendary Percussionist Pete Escovedo is an artist who broke down the barriers between Smooth Jazz-Salsa-Latin Jazz and contemporary music. His name has been synonymous in the music industry for more than 40 years.

Boogaloo Assassins/Boogaloo Assassins are a Los Angeles-based, 12-piece Latin band with a sound and style inspired by the Latin Boogaloo, Latin Soul, Salsa and Latin Funk records of the 1960s and 70s.

Betty Bryant/A native of Kansas City, Missouri, Betty Bryant, dubbed “Cool Miss B” by her fans and fellow musicians, is a revered pianist/singer who brings a solid piano technique, a light, swinging touch and a skilled vocal approach to her music.

TC Carson/TC is a jazz vocalist, voiceover artist and actor best known for his portrayal of the debonair Kyle Barker on the hit sitcom “Living Single.”

Gretchen Parlato/described as “a singer with a deep, almost magical connection to the music.” – Herbie Hancock

Roy Gaines Tuxedo Blues/He has toured and recorded with blues greats like Chuck Willis and Ray Charles and did session work for Bobby Blue Bland and Junior Parker.

“For this festival, we wanted to present a special program unlike anything we’ve seen before,” said Councilman Curren D. Price, Jr., who hosts the fan favorite event in Council District 9. “It was important to me that we pay homage to the traditional sounds and historical predecessors while integrating other genre influences.

“This fusion allows us to connect with our devoted jazz enthusiasts while generating a wider appeal and drawing in new fans who will ensure that this continues to be one of the biggest and best jazz festivals in the nation.”

Each year, the Central Avenue Jazz Festival draws tens of thousands of people from across the U.S. In addition to live performances by world-class favorites and up-and-coming artists, the revered summer event features four pavilions, including the Balfour Beatty Youth Pavilion; GRoW @ Annenberg Health & Wellness Pavilion; an Arts Pavilion; and a Business Development & Employment Resources Pavilion. Dozens of merchants and food vendors will be available all weekend long.

For more information on the 23rd Annual Central Avenue Jazz Festival, including a complete schedule of performances, please visit www.centralavejazzfest.com.

Councilman Curren Price recognized Brotherhood Crusade on June 12, 2018 on their 50th anniversary of providing critical human and social services to tens of thousands of Angelenos. For five decades, this nonprofit organization has worked fervently to remove barriers to success and increase opportunities so that everyone has a shot at a better life.

Since its founding, Brother Crusade has assisted communities with a variety of programs—ranging from educational enrichment and academic assistance services, at-risk youth prevention programs, health education, life and social skills training, and domestic violence help, to name a few.

"The resolute leadership and firm dedication from our valued nonprofit partners who work daily to fill important gaps for our children, families and seniors cannot go unnoticed," said Councilman Price. "Thank you Brotherhood Crusade for your vision, passion, service and love of community!"

The City of Los Angeles Department of Recreation and Parks will launch the FREE summer lunch program on June 11. The healthy lunch program is open to children ages one to 18, helps families save money and encourages use of public parks through Aug. 10.

No application or proof of income is needed. Families can just bring their children to one of the participating City of Los Angeles parks in Council District 9 below. Food is served on a first come-first served basis.

The community event promotes the development, progress and success of Latinas in South Los Angeles. Over the course of the day, attendees were treated to motivational speakers, insightful discussions, live entertainment, a job and resource fair.

"I hope the women who joined us found the conference to be enriching on a professional and personal level," said Councilman Curren Price, who hosted the event at Los Angeles Trade-Tech College. "My wish is that the ladies who did attend continue to learn, grow and go on to achieve their goals!"

To see all the pictures from this year's event, click here.

Save a Life Rally Brings out Hundreds

I was moved this morning by the loud and large turnout at the “Save a Life” rally in support of temporary homeless housing facilities.

Please know that in Council District 9 we are working fervently to address every layer of the homeless crisis in front of us. From establishing the first safe parking program in Los Angeles; launching a mobile toilet and hand washing station; bringing mobile showers to help people living on the streets get clean. Now, here’s some more news! Next week, we’ll be rolling out a new laundry service that will allow people experiencing homelessness to wash and dry their clothes for FREE.

On a larger scale, you might have heard that my Office has authorized building more than 295 units of permanent supportive housing in the Ninth District over the course of the next several years. And, my staff, with input from local community stakeholders, are vetting possible locations for an emergency shelter and examining bridge housing solutions. Rest assured that I will continue to update and inform you every step of the way, and we will make sure constituents have a direct line to provide feedback.

If you have any questions about homelessness or any other local issue, please call my Constituent Services Center at (323) 846-2651. Remember, any one of us could fall into homelessness at any time, and our actions to combat this epidemic ought to be guided by love, compassion and respect.

Did you know the Lucas Museum of Narrative Art is bringing thousands of new jobs to the 9th District? On May 23, local residents will have the opportunity to learn about how they can take part in the construction of the $1-billion museum. Employers and union representatives will also be available to answer questions.

Don't miss out on this great opportunity for a career in construction!

More information at www.LucasMuseumConstruction.org or by calling Councilman Price's District Field Office at (323) 846-2651. 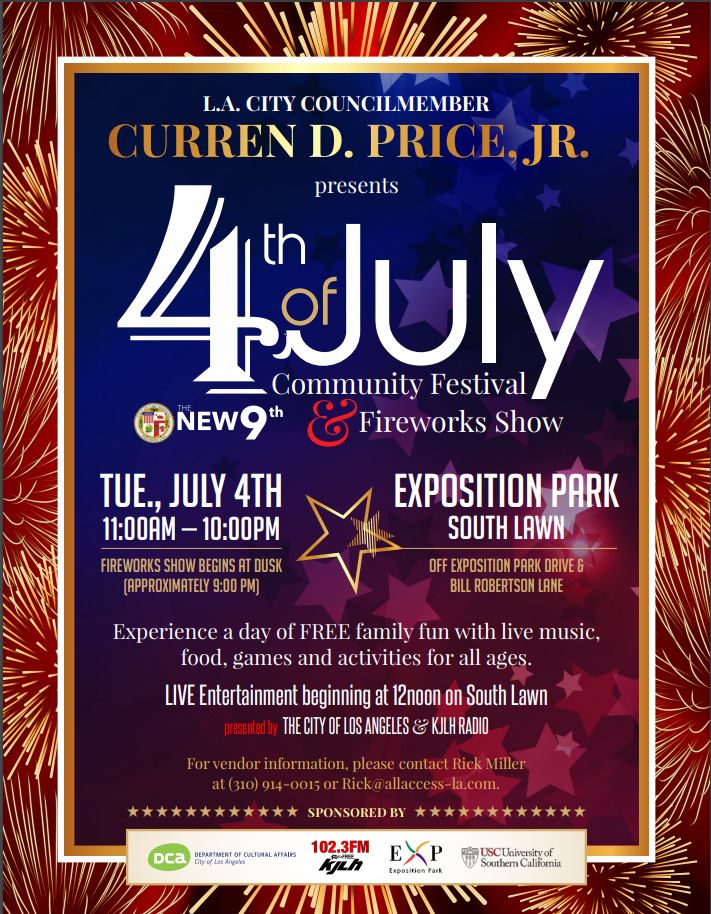 Councilmember Curren Price will play host to the annual 4th of July Community Festival & Fireworks Show with a picnic style event on the South Lawn at Exposition Park. Enjoy live music, games and activities for the kids, delectable food and an over-the-top fireworks show on Wednesday, July 4 from 11 a.m.-10 p.m. See you there! 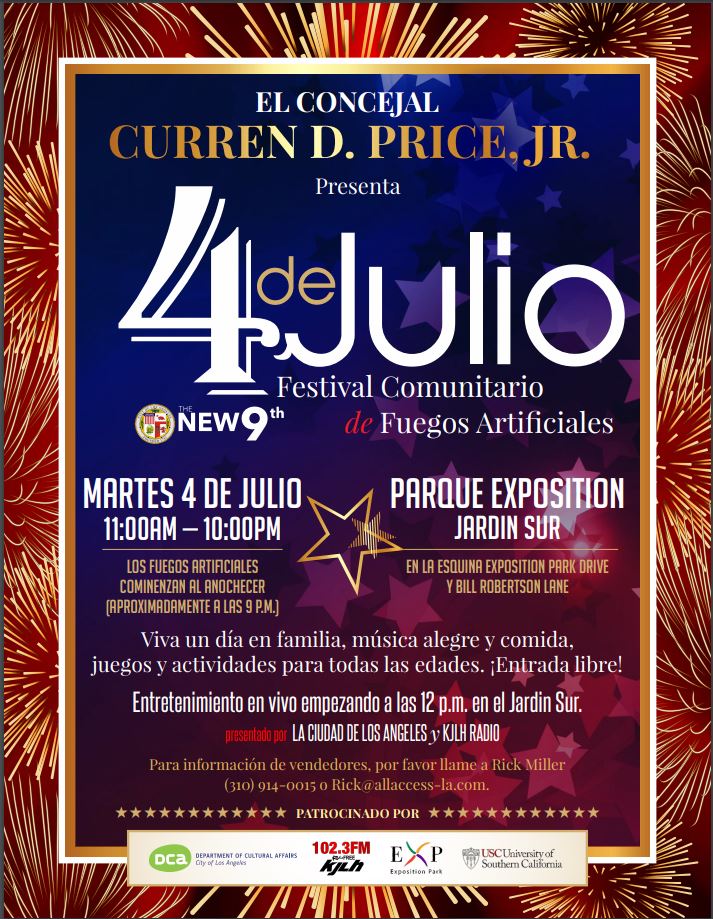 Join Me in Celebrating LAFC Day in the City of Los Angeles!

A year and a half ago, my District was presented with a once-in-a-lifetime opportunity: to be the home of the next Major League Soccer franchise.

To celebrate the completion of the Banc of California Stadium and in advance of the team's home-opener this Sunday, we declared today, April 27, 2018, Los Angeles Football Club Day in the City.

In its inaugural season, the LAFC has electrified Angelenos from all walks of life, giving them a purpose to root for something bigger than all of us. It has fostered community identity and pride; and strengthened the cross cultural tapestry that makes this City the greatest in the world!

Since 2016, South LA is a buzz about what it would mean to have the sport in our backyard and the significance of this $350 million stadium--dubbed the cathedral of soccer. The value extends beyond sports and entertainment, shops and restaurants. It triggered investments in and around Expo Park and changed the lives of local residents who obtained employment through this development. This is not just a stadium, but an economic engine that is also helping minority- and women-owned businesses in the area!

LAFC: This is your day and our way of saying, “Welcome to your new home!”