Councilman Curren Price was joined on Dec. 14 by Mayor Eric Garcetti, Supervisor Mark Ridley-Thomas, and other VIPs, as they broke ground on the $32 million affordable housing Rise apartments along Figueroa.

"The groundbreaking for the Rise apartments was yet another giant step in the City's effort to eliminate homelessness and ensure our most vulnerable people have a shot at living a life of dignity and respect," added Councilman Price. "RISE apartments offer hope, opportunities and new beginnings; and the fortunate individuals that will one day call RISE their home can and will prosper!"

This latest project complements about 1,000 units of affordable housing units in CD 9 that are currently in the pipeline.

As we approach the end of a wonderful 2018, I want to thank you for allowing me the opportunity to build a better and more prosperous District 9. This holiday season, I would like to pause and take a look back on what has been a memorable year for the NEW 9th! Please click on the image below to watch a short video that my Office put together.

The first motion directs City departments to study the feasibility of creating an “Affordable Housing Development Fast Track Program,”which would allow such projects to benefit from an expedited approval process. It also calls for the City to identify other viable solutions, such as easing the review process and reducing the cost of creating new affordable housing in Los Angeles.

"There are countless projects that unfortunately never get off the drawing board because of the costs and risks involved in the City review process," Price said. "We need to consider all possible avenues so that we are in a better position to meet the soaring housing demands for our most vulnerable populations.

It’s time we take a closer look at how we review the development of affordable housing and remove unnecessary roadblocks."

Also on Wednesday, Councilman Price introduced a motion that would reform the process by which Proposition HHH (Prop HHH) funds are allocated. In 2017, voters approved the Prop. HHH bond measure to build 10,000 homeless housing units with wrap-around services over the next decade.

However, most of the HHH projects now in the pipeline are concentrated in disadvantaged communities like Council District 9, which Price represents. For this reason, he is instructing City departments to take into account market values and economic conditions.

"We must address the realities that make it difficult for projects in higher resource areas to come to fruition,” Price said. “Each District in our City bears the responsibility to fix the homeless crisis and the weight must be distributed equally.

Doing so would allow for more equal distribution of homeless housing projects throughout the City so that neighbors like those within the 9th Council District don't experience an over concentration and can continue to enjoy economic growth."

As of December 2018, Councilman Curren Price had authorized the building of nearly 500 permanent supportive housing units in his District.

Plans to expand and modernize the Los Angeles Convention Center moved one step closer to reality on Dec. 12 when the City Council voted to approve an exclusive negotiating agreement with Anschutz Entertainment Group (AEG).

“For far too long, the Convention Center has sat idle - trapped in the 80s and unable to realize its full potential,” said Councilman Curren Price, who represents Council District 9 where the city facility is located. “We have a once-in-a-lifetime opportunity to get the Convention Center on par with Convention Centers across the United States which can support large national and international events.”

The exclusive negotiating agreement approved this past week will give the City and AEG one year to work out the final details of the project.

CD 9 TRAFFIC ALERT: Rolling Loud Los Angeles 2018, one of the largest hip-hop festivals in the world, is happening Dec. 14-15 at Banc of California Stadium in Exposition Park. Please plan accordingly and note that heavy traffic + road closures are expected during both days.

The following streets will be CLOSED to ALL traffic. Please help spread the word to anyone who might be impacted.

If you have any questions or concerns regarding this information, please reach out to event organizers using the below number during the indicated hours:

After years of attempts, Los Angeles became on Nov. 28, 2018 the second-largest U.S. City to legalize sidewalk vending by approving a permit system.

Beginning Jan. 1, vendors will have to abide by a series of rules and regulations, including: ensure that they are not impeding the flow of pedestrian traffic or ADA access; be three feet from one another; maintain a clean area around their cart; have all the necessary permits, and much more. Over the next year, the City will work to implement a citywide permit program with the goal to issue permits by January 2020.

“This is win for the vending community and a gain for micro-entrepreneurs in pursuit of opportunity and the American Dream. It is justice for tens of thousands of immigrant and low-income Angelenos who work early mornings, late evenings and sacrifice weekends as sidewalk vendors,” said Councilman Curren Price, who introduced a motion to legalize sidewalk vending alongside Councilmember José Huizar. “After years of hearings, compromise and healthy debates, we can finally say, for the first time ever, Los Angeles will have a sensible sidewalk vending policy that is fair, enforceable and inclusive.”

The new rules includes restricted areas where vending is prohibited within 500 feet, including the Hollywood Walk of Fame and Universal Studios, as well as Staples Center, LA Memorial Coliseum, Dodger Stadium, and the Hollywood Bowl on event days.

To see footage of this historic day, please click here. 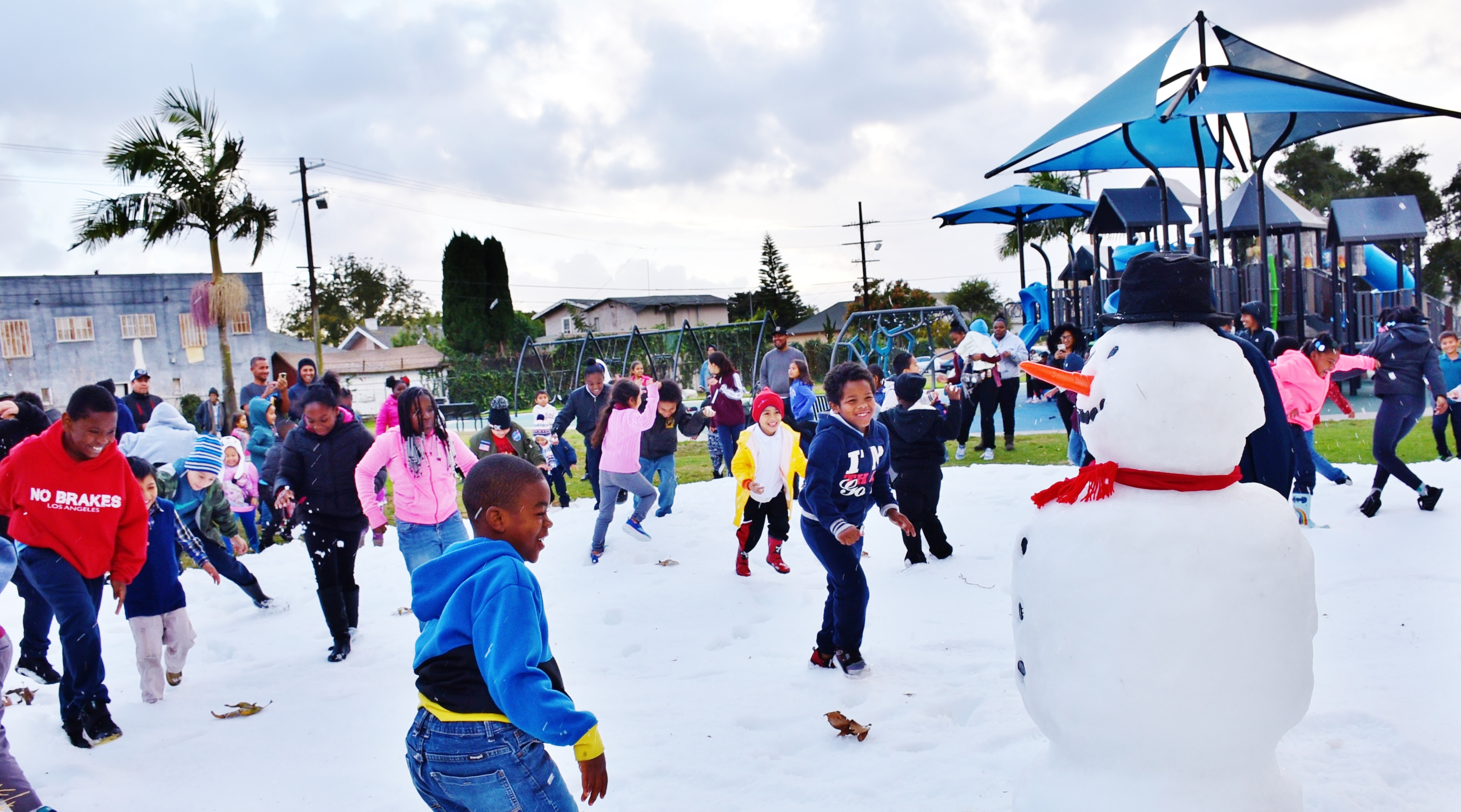 The rain didn’t dampen the moods or Holiday cheer of hundreds of children and local families attending the Vermont Square Winter Wonderland on Nov. 29.

The popular community event featured family-friendly activities, including 30 tons of snow, a video game truck, and FREE food. Dozens of bikes were raffled off, and attendees had the opportunity to take pictures with Santa Claus!

“I am dedicated to bringing families together and providing opportunities where our kids can laugh, play and savor their childhood safely,” said Councilman Curren Price, who hosts the event every year. “Up next, Winter Wonderland on Central Avenue! Once again, it’s going to snow in the NEW 9th!”

For more information on the upcoming Central Avenue event, see flyers below.

To see all the photos from this year's Vermont Square Winter Wonderland, please click here.

Check out the video with this year's footage here. 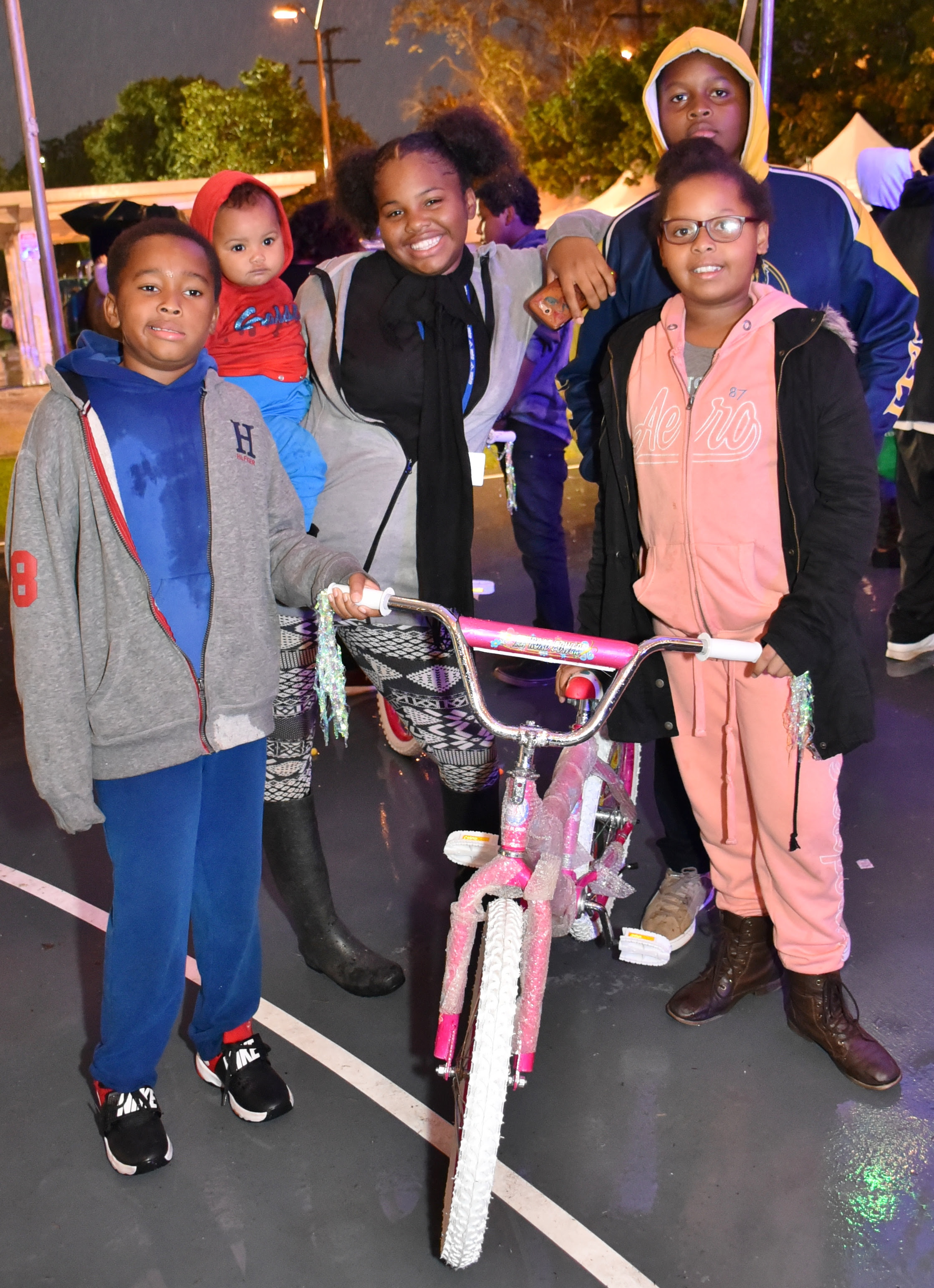 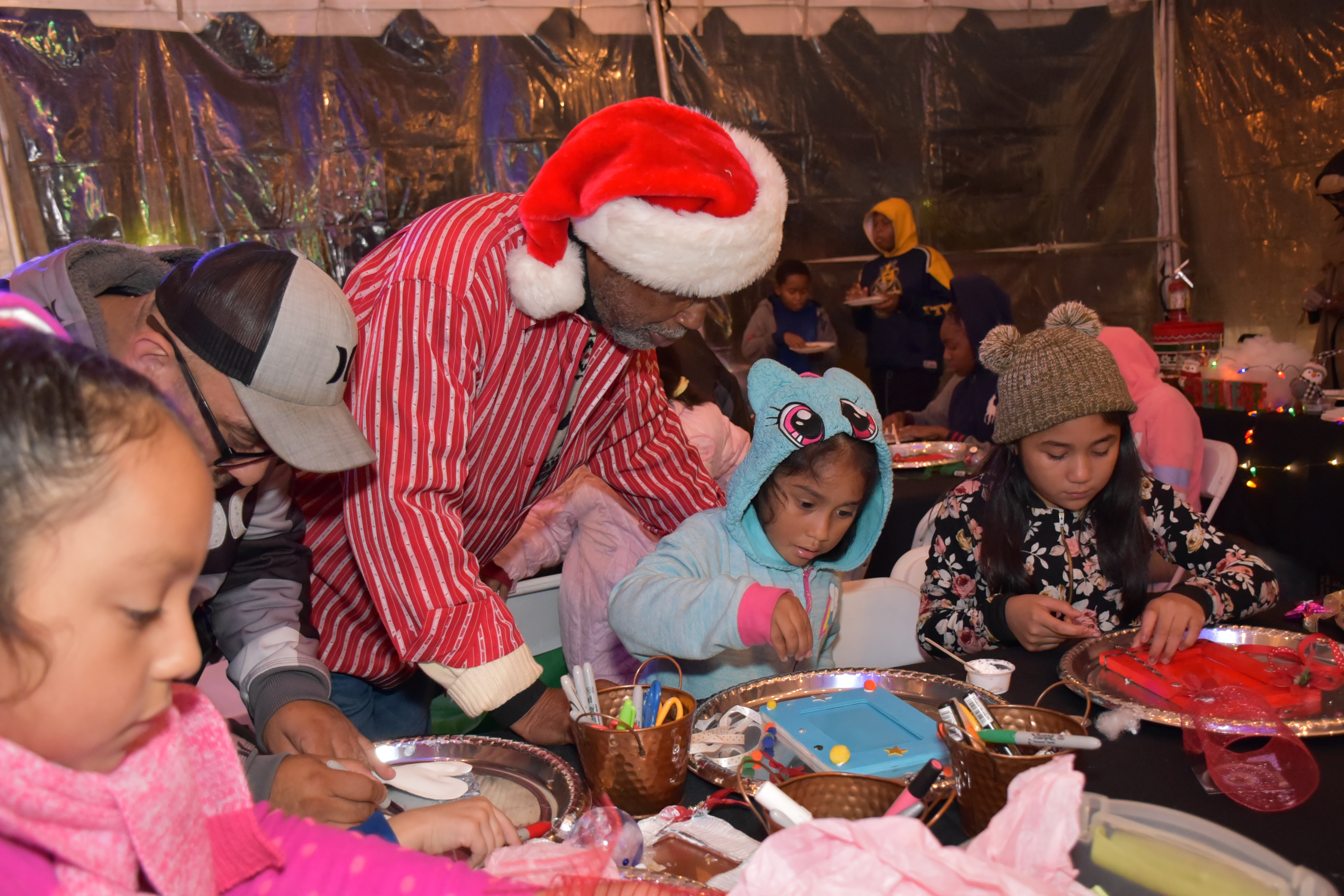 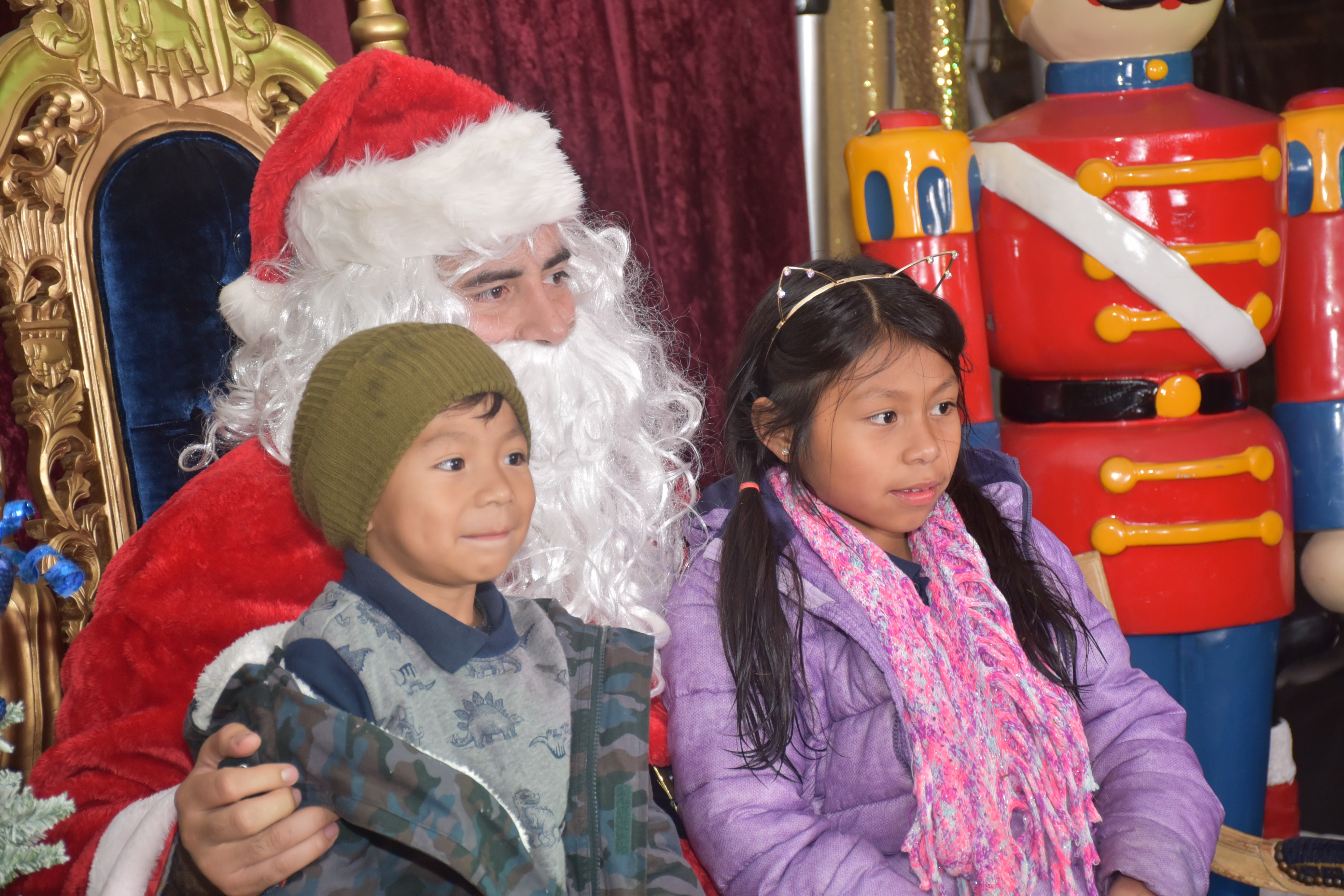 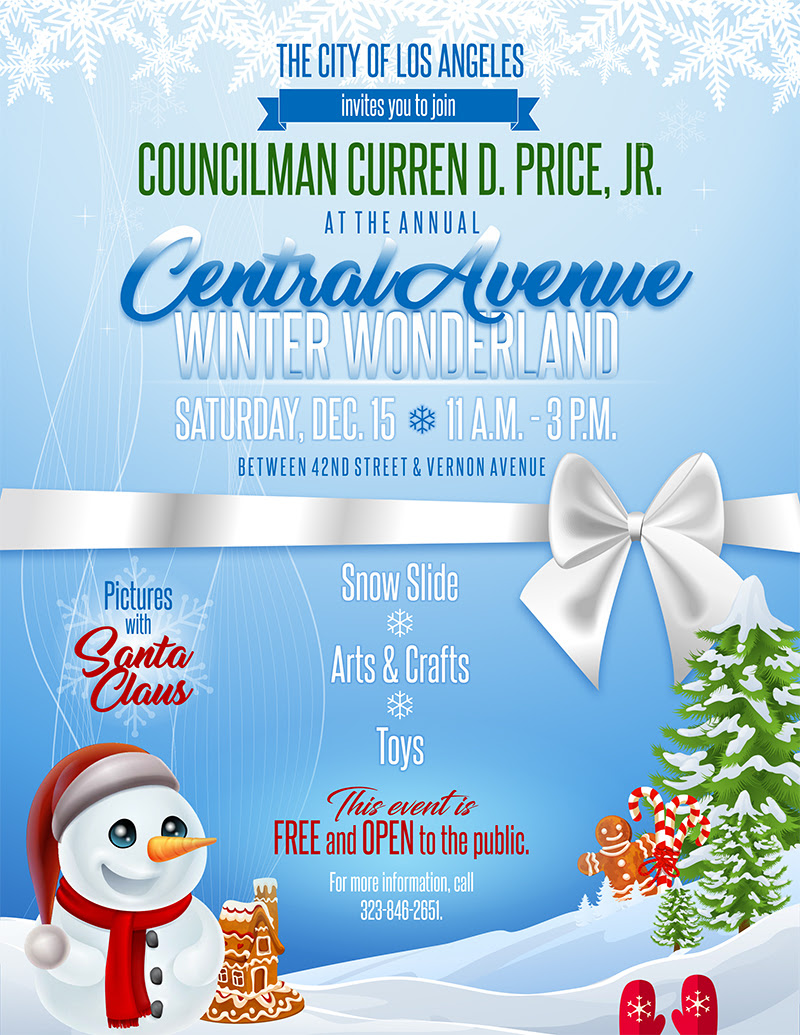 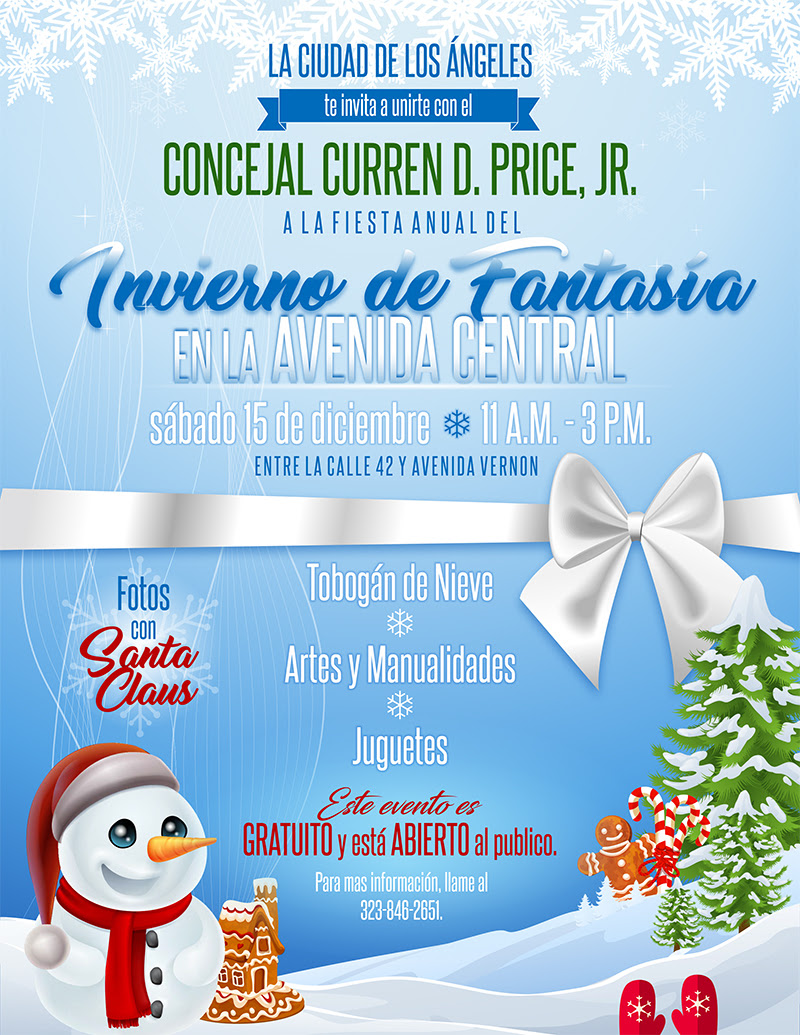 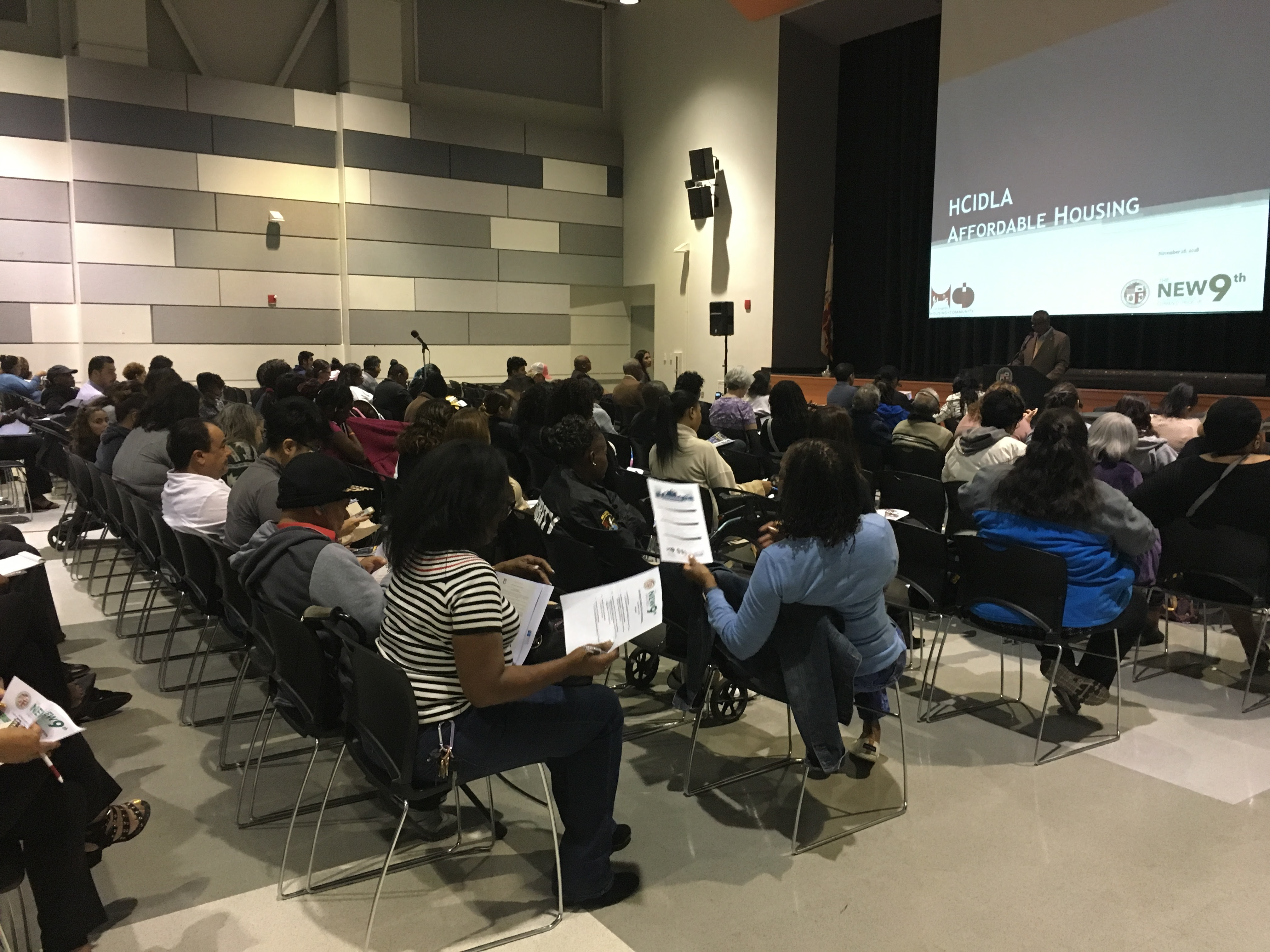 “I hope the event served as a first step into getting many of our local families into housing,” Price said. “I have made it my personal mission to incorporate all housing typologies, including workforce and market-rate housing, into my overall strategy to help all local families living in my District.”

Please see below for housing projects coming to Council District 9.

The Office of Councilman Price partnered with about 40 local nonprofits to identify families in need. Gift cards and vouchers were also provided to help families prepare a Thanksgiving meal.

"It has been my honor to support thousands of community members through the years as part of my Office's annual turkey giveaway," Price said. "We want to make sure our friends and neighbors, who might be struggling financially, are able to enjoy a warm and hearty Thanksgiving meal with their loved ones."

Thank Your for Your Service, Mickiela!

In commemoration of Veteran's Day, the City Council honored 15 brave and selfless warriors during a special presentation this week. Each Councilmember selected an honoree living in his or her District to thank them for their service and commitment.

Councilman Curren Price shined a bright light on Mickiela Montoya, a District 9 veteran whom you might have read about in the book "The Lonely Soldier." She was also featured on CNN, ABC World News Tonight and The Oprah Winfrey Show, among other outlets.

Mickiela served in the California Army National Guard and Army Reserves for eight years, including a deployment to Iraq for one year as a military police officer. After returning to the United States, she dedicated herself to raising public awareness on the lack of services available to help female veterans. Today, this extraordinary Council District 9 resident works for the U.S. Department of Veterans Affairs and is carrying out her life's mission.

Thank you Mickiela for your love for country, democracy and humankind.